US election heads to the courts 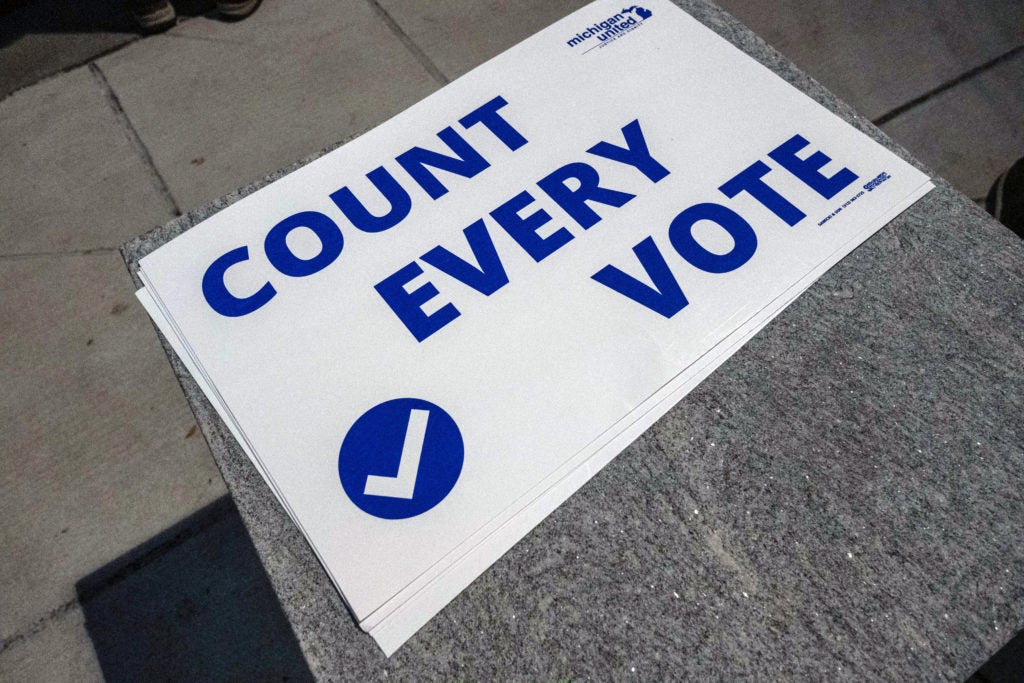 A “Count every vote” sign lays outside of the TCF center where ballots are being counted in downtown Detroit, Michigan on November 4,2020. – Democratic presidential challenger Joe Biden on November 4 neared the magic number of 270 electoral votes needed to win the White House with several battleground states still in play, as incumbent President Donald Trump challenged the vote count. (Photo by SETH HERALD / AFP)

Washington, United States—Democrats and Republicans girded Wednesday for a legal showdown to decide the winner of the tight presidential race between Republican Donald Trump and Democratic challenger Joe Biden.

After Trump declared overnight he was ready to go to the US Supreme Court to dispute the counting of votes, his campaign announced a demand for a recount in Wisconsin and lawsuits in Michigan and Pennsylvania, three states which each side needs to win the presidency.

Trump’s behavior raised the specter of the election ultimately being decided, as in 2000, by a high court ruling on how states can tally votes or conduct recounts.

The Trump campaign lawsuits attack a unique aspect of the 2020 election: that states and tens of millions of voters turned to mail-in ballots because of the Covid-19 pandemic.

That included extending the periods for receiving ballots, due to an overburdened US Postal Service, adding time to count the votes, and other steps to make the process easier.

The Republicans say some of those changes were decided or implemented improperly and in ways that favor Democrats.

In Pennsylvania the Trump campaign said it would join an existing Republican suit over the state’s deadline extension for receiving mail-in ballots.

If successful, they have the potential to disqualify tens of thousands of ballots delivered to election authorities after November 2.

The Pennsylvania Supreme Court has already judged the extension legal, and the issue went to the US Supreme Court last week, which turned it back, declining to get involved.

But the high court left the door open for a challenge after the election.

The Trump campaign also said it was suing to have ballot counting in the state temporarily halted, alleging that the process was being hidden by Democrats. In Philadelphia the counting was live-streamed.

And they sued over an adjustment made to voter identification procedures also made to adjust to the coronavirus, saying it violated the election code.

In Michigan, the Trump campaign sued to halt the ballot counting process saying they were not given “meaningful access.”

– Can the election be decided by the court? –

Yes. In 2000 the contest between Republican George Bush and Democrat Al Gore for the White House rested on one state, Florida.

With Bush ahead by just 537 votes out of six million, and widespread problems with the state’s punch-card ballots, the Gore campaign sought a statewide recount.

The Bush campaign appealed the case to the US Supreme Court, which ruled to effectively block the full recount, handing the election to Bush.

But experts say such lawsuits are only practical if focused on a real problem and the divide between the two sides is narrow.

If the margins between the two sides in that state is two or three percentage points — say, a 100,000 vote difference in Pennsylvania — “that’s pretty difficult to be litigating at the end of the day,” said Derek Muller, a law professor at the University of Iowa.

However, said Muller, “If it comes down to one state, then I would expect really serious litigation.”

If a campaign or candidate sues over a state regulation, it has to first exhaust its options in the state justice system before heading to federal court and the US Supreme Court.

By piggybacking on the existing ballot extension case, with Trump himself as the injured party, his campaign has raised its chances of being heard by high court.

But the Supreme Court has been cautious over getting involved in voting matters that are decided by state laws, and is aware that it risked its standing as an independent body by effectively handing the 2000 election to Bush.

A case would put the political leanings of the nine justices — six conservatives and three liberals — in the spotlight, with the light harshest on the court’s newest member, Amy Coney Barrett, who joined the court only last month, chosen by Trump.

Trump said repeatedly that he rushed her appointment in part so she could be in place to hear any election cases, placing an immediate cloud over her.

“The Supreme Court doesn’t have to intervene,” said Muller.

“It felt like it needed to in 2000, but it’s not necessarily clear they would feel the same way today.”

Read Next
Win or lose, Trump’s movement stronger and bigger than ever