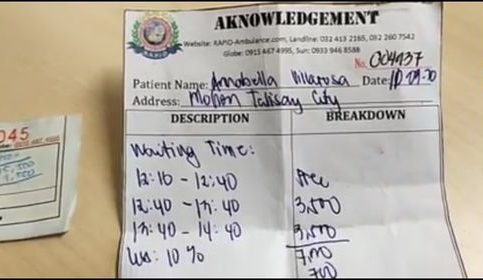 The acknowledgment receipt issued by Rapid Ambulance Service to a client. | Screengrabbed from CDRRMO’s video

CEBU CITY, Philippines — The Cebu City Disaster Risk Reduction and Management Office (CDRRMO) will be endorsing a complaint of alleged overpricing of a private ambulance service.

Ramil Ayuman, administrative head of the CDRRMO, said that the complainant, Randy Villarosa, went to their office on Saturday, November 7, 2020, to report the alleged overcharging of Rapid Ambulance Service.

Villarosa paid over P45,000 for the ambulance service to transfer his brother-in-law from a private hospital along Osmeña Boulevard to the government-run Vicente Sotto Memorial Medical Center (VSMMC) which is less than a kilometer away on November 3, 2020.

Based on the statement of Villarosa given to CDRRMO, the ambulance of the private hospital, the ERUF, and other ambulance services were not available during the transfer.

The family agreed to take the Rapid Ambulance Service so that the patient will be moved to VSMMC faster, and within a distance of less than a kilometer with three hours of waiting time, they already had to spend P45,500 for the ambulance services.

Furthermore, Villarosa claimed that the ambulance service was not able to provide a proper receipt, only an acknowledgment for their transaction.

The ambulance service charged P5,500 for the actual transfer, P550 for special care plus, P2,500 for ISO, P3,500 for risk and disinfection, P950 CCU plus, P3,000 for oxygen, and P7,500 for portable transport Mechanical Ventilator which is inclusive of one oxygen tank, one oxygen gauge and flow meter, tubing, and filter.

It is not clear if the patient was able to utilize all these items charged by the ambulance service during the transfer waiting time.

“Mao daw ni ilang package. Nahangyo namo mao na gigaan mig 10 percent, mao na P45,500 ra ang among gibayran. Nahibong mi ani kay duol raman kaayo. (They said this was their package. We asked for a leeway so they gave us a 10 percent discount, so we only paid P45,500, We were shocked because the transfer was just close),” said Villarosa.

Ayuman said that the CDRRMO will endorse on Monday this complaint to the DOH for further investigation, as the license of ambulances are provided by the DOH.

The Rapid Ambulance Service said in a statement to CDN Digital that this complaint was sourced in misinformation on Villarosa as he was not actually the one negotiating with the service.

“He was not the one who requested for the said ambulance and ICU equipment (sic). He was an in-law of the patient who knew nothing of the transaction. His allegations are libelous, false, and baseless in nature,” said the ambulance service system.

In text messages released by Rapid, the family of Villarosa actually confirmed the service with full knowledge of the payment needed.
They said that they do not send out an ambulance without the confirmation of the client. The ambulance and medical team assess the situation of the patient prior to providing the breakdown of the amount charged.
“The statement of the complaining person were grievously false that our ambulance went to the hospital to pick up the patient without giving the charges. You can even see in the text conversation between the husband and our Medical Dispatcher that the husband was looking for the ambulance, ‘mam padung na inyong ambulance?’ The charges were given before hand and properly explained.”
” The charges of the patient were more than fair and they received more than value for their money. The equipments needed can not be found in other ambulance services. We at RAPID Ambulance Service adhere to the highest commitment ‘To serve and save lives..’ We have always upheld to professionalism and we follow strict guidelines and protocols,” Rapid added. /rcg
Read Next
Lapu-Lapu cops try to identify 5 masked gunmen involved in Babag killing