PhilHealth should keep its promise to dialysis patients – Zarate 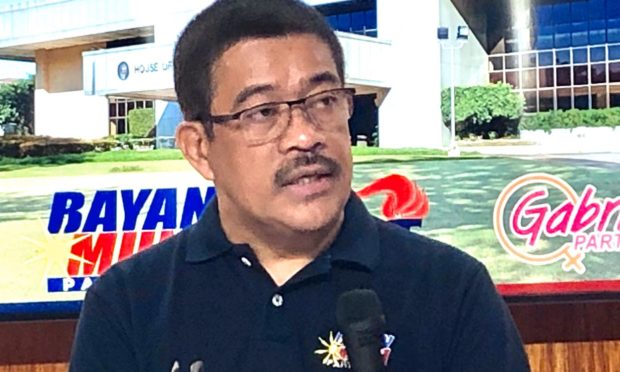 MANILA, Philippines — The Philippine Health Insurance Corp. (PhilHealth) must stay true to its word and ensure that dialysis patients will receive treatment even if they are past the yearly limit of 90 sessions per year, Bayan Muna Rep. Carlos Zarate said in a statement issued on Saturday.

Zarate made the statement after the Coalition for People’s Right to Health (CPRH) bared that PhilHealth members who needed dialysis were being denied service on reaching the yearly limit despite being exempted from this rule under the Bayanihan to Recover as One Act.

This means that patients had to pay for their own dialysis sessions after the 90th session in a single year.

“We in Bayan Muna along with CPHR condemn this development as an affront to and a reneging on the people’s right to health. It seems health is, once again, held hostage by bureaucracy and politics,” Zarate said.

“Besides, it was PhilHealth itself that proposed these benefits ‘during fortuitous event’ in a 16 September statement, signed by its own Executive Vice President and COO,” he added.

“The original basis of the announcement, ‘Bayanihan 2′, is not due to lapse until 19 December, on Congress’ next adjournment,” he stressed.  “In addition, the national state of calamity was even extended to 12 September 2021, as per Proclamation 1021, signed on 16 September and now this? Worse, the DOH (Department of Health) remains silent on the issue.”

CPRH said in a Facebook post last Nov. 5 that it had received complaints that some PhilHealth members could no longer avail of dialysis services after reaching the yearly limit.

Bayan Muna said that this was dangerous as people might refrain from getting treatment and wait for 2021, which was only a few weeks away.

But that might worsen their condition — especially as the COVID-19 pandemic places them at a greater risk.

“The extension of dialysis treatment for patients is imperative and we are challenging PhilHealth and the [DOH] to get their act together as soon as possible because lives are at stake, if not then we have to investigate them in Congress,” Zarate said.

CPRH noted that PhilHealth recently posted on its official Facebook page an assurance that the dialysis sessions beyond the 90-session limit would still be paid for. However, the post was taken down — which the CPRH questioned. 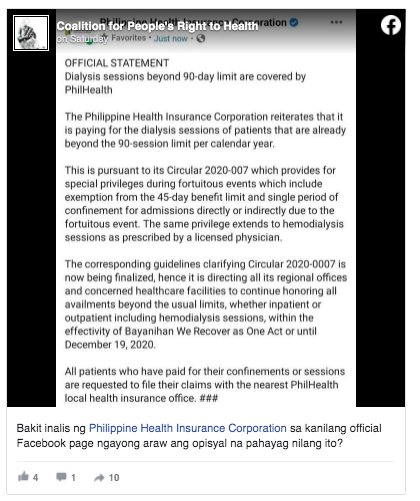 PhilHealth, the government-owned health insurer, is currently involved in a myriad of corruption issues stemming from anomalous procurement methods, allegations of a ‘mafia’ pocketing money, and the release of funds intended for the COVID-19 response to clinics handling other health cases like pregnancy and dialysis.