MANILA, Philippines — Citing difficulties in attracting new students and ramping up enrollment, the 107-year-old College of the Holy Spirit of Manila (CHSM) will be ceasing operations after school year 2021-2022.

In a letter dated Oct. 28 to the CHSM community, Sr. Carmelita Victoria of the Missionary Sisters Servants of the Holy Spirit said that while the school had managed to survive over the years with the strong support of its alumni, faculty and staff, the challenges it faced along with the country’s education sector had “become increasingly complex” in the last decade. 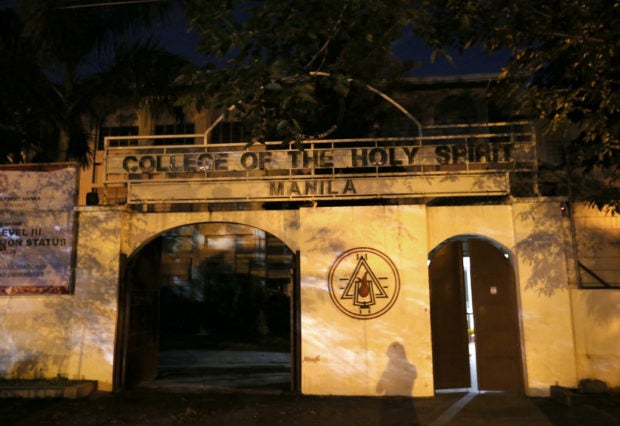 ‘SIGNS OF THE TIMES’ Struggling to stay viable, the College of the Holy Spirit Manila, is giving itself up to the end of the school year 2021-2022 to wind up operations. —RICHARD A. REYES

“The recent COVID-19 pandemic has exacerbated the situation. The reduction or loss in family income, mobility restrictions and social distancing requirements, and the new demands of distance learning have adversely affected enrollment, not only in CHSM, but in most private schools as well,” said Victoria, the provincial leader of the order that runs the school.

“After consultation with representatives of our stakeholders, and a deep and prayerful process of discernment, we are now even more convinced that the Holy Spirit is speaking clearly to us through the signs of the times, compelling us to make this extremely difficult decision: to close CHSM at the end of academic year 2021-2022,” Victoria said.

She said the timetable would allow the CHSM to graduate its current Grade 11 and third year college students, “should they choose to stay on.”

Also among the factors that had created a “challenging environment’’ for the school, she said, are the government policies on the K-12 curriculum; free tuition in state colleges and universities, local universities and colleges, and state-run technical and vocational institutions; and the significant increase in public school teachers’ salaries compared to their private school counterparts.

As of October, 865 private schools across the country have served notice that they were closing down this year. Education officials attributed their decision to the rising cost of operations and low enrollment rate due to the pandemic and the ensuing economic slowdown.

According to Victoria, the CHSM management had initiated a series of dialogues with its faculty and staff, parents and students, and the alumni community on the process of implementing the decision.

Founded in 1913, CHSM is a Catholic coed learning institution that is part of the Mendiola Consortium, an organization of five schools located along Mendiola Street in Manila, an area best known for being the site of protest rallies near Malacañang. The consortium also includes Centro Escolar University, San Beda University, La Consolacion College and Saint Jude Catholic School.

Formerly known as the Holy Ghost College, it was originally exclusive to girls but started admitting male students in the high school department in 2005, and in the college department the following year.