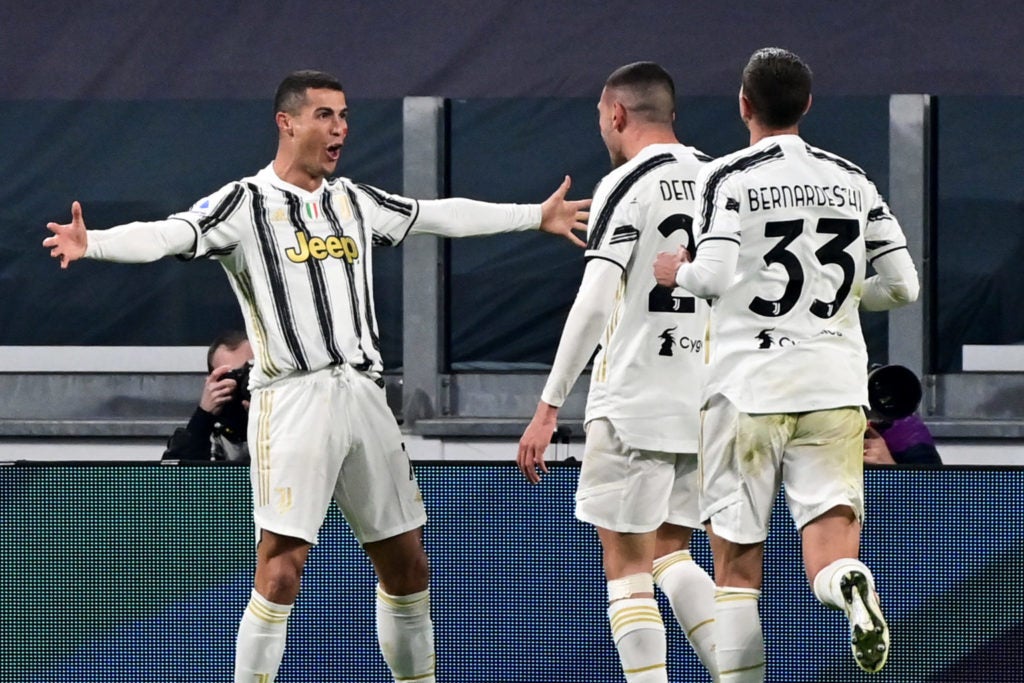 Juventus’ Portuguese forward Cristiano Ronaldo (L) celebrates after scoring his second goal during the Italian Serie A football match Juventus vs Cagliari on November 21, 2020 at the Juventus stadium in Turin. (Photo by MIGUEL MEDINA / AFP)

Cristiano Ronaldo scored his third brace in five games as champions Juventus moved up to second place in Serie A on Saturday with a 2-0 win over Cagliari in Turin.

Andrea Pirlo’s side are one point behind leaders AC Milan, who travel to fourth-placed Napoli on Sunday.

Lazio also won 2-0 under torrential rain at Crotone, but Atalanta were held 0-0 at promoted Spezia days before their Champions League trip to Liverpool.

Juventus had been held 1-1 at Lazio last time out — one of four stalemates this season for the nine-time reigning champions — but quickly took charge against the Sardinians.

“We needed a match like this,” said Pirlo.  “There were excellent performances, even from those returning from national teams.

“A lot of them arrived two days ago and did their first training yesterday and were also tired from the trip.

“Tonight they also had fun, performances like this allow the players to gain confidence.”

Federico Bernardeschi had an early goal ruled out for offside before Ronaldo struck twice in a four-minute spell before the break.

The Portuguese striker blasted in an Alvaro Morata cross on 38 minutes, before latching onto a Merih Demiral header from a corner for the second from close range minutes later.

Ronaldo, 35, has come back strong after his coronavirus layoff, scoring eight goals in five games to join Milan’s Zlatan Ibrahimovic at the top of the Serie A scorers’ chart.

Ragnar Klavan had a goal disallowed for Cagliari midway through the second half.

But it was Juventus who threatened a third with Demiral, Morata, Bernardeschi and Paulo Dybala having shots at goal.

Dutch defender Matthijs de Ligt played the entire game in his first match since shoulder surgery in August, a boost for Pirlo’s side without injured duo Leonardo Bonucci and Giorgio Chiellini before Tuesday’s Champions League game against Hungarian side Ferencvaros.

Gian Piero Gasperini’s Atalanta stalled before their big match at Anfield in four days’ time, being held to a second consecutive stalemate.

Atalanta are sixth, level on points with seventh-placed Lazio after eight games.

“Technically it was not a good performance but there are no easy matches and the team did what they had to do,” said Gasperini, whose side failed to score for the first time this season.

Diego Farias hit the woodwork for Spezia with Atalanta’s Duvan Zapata denied by the post before the break.

Germany’s Robin Gosens had a goal chalked off for offside on 56 minutes for the visitors.

Spezia, in 12th, could thank goalkeeper Ivan Provedel for the point with a double save from Mario Pasalic and Gosens, with the Croatian denied again late on.

In Calabria, Ciro Immobile scored on his return from coronavirus isolation with his 21st-minute diving header paving the way for victory for Lazio on a waterlogged pitch in southern Italy.

It was the fourth Serie A goal in six games this term for the top scorer in Europe last season, who had been out for three weeks because of Covid-19.

“The whole thing has been unpleasant,” said Immobile, who missed three of his club’s last four games but also matches for the Italian team.

“But now I’ve come back even more motivated because when you have been stopped you realise how much you love this sport.”

The Italy international was also involved in the second goal, sending Joaquin Correa through just before the hour mark as the rain briefly subsided.

Argentine Correa fired in his first league goal this season from a tight angle through the legs of Crotone goalkeeper Alex Cordaz.

Simone Inzaghi’s side host Zenit Saint Petersburg in the Champions League next week.

Rock bottom Crotone fell to their sixth defeat in eight games as they remain winless in their return to the top flight after two seasons in Serie B.

Read Next
Figueiredo defends title, submits Perez in Round 1