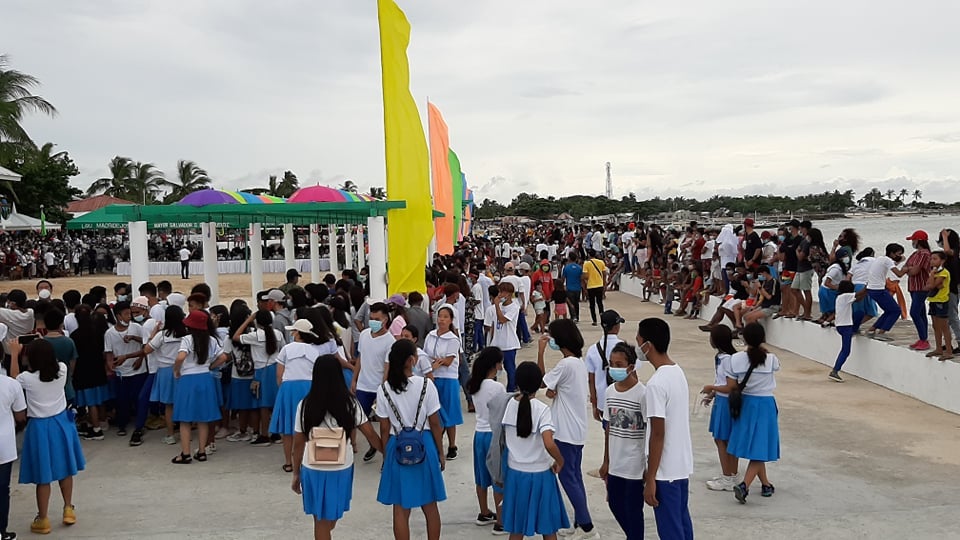 Students in school uniforms are seen as among those who joined the crowd that gathered in Kota Park, Madridejos on  November 27, 2020 where Suroy-Suroy Sugbo in Bantayan Island has been held. | CDN Digital Photo by Morexette Marie Erram

CEBU CITY, Philippines — The Department of Education in Central Visayas (DepEd-7) will be conducting their own investigation on the crowd gathering during the Madridejos stop of Suroy-Suroy Sugbo in Bantayan Island on November 27, 2020.

Director Salustiano Jimenez of DepEd-7 announced that their agency had directed the Cebu province division of DepEd (DepEd-Cebu) to form a ‘fact-finding’ team. The team, Jimenez said, would validate reports that students were told to go out of their houses, in school uniforms, to greet participants of the three-day event.

“We have received unverified information about this, and this is why we will be forming a fact-finding team which will investigate. We have instructed the Cebu province division to check these reports,” said Jimenez in a mix of Cebuano and English.

Jimenez also said they would determine the appropriate sanctions for any school official and worker found proven to be responsible for the event.

“DepEd will see what we can do if teachers or principals will be proven to be behind this incident… And the gravity of the situation so we can assess what will be the sanctions if any,” he added.

The Suroy-Suroy Sugbo in Bantayan Island drew flak online when photos and videos of the Madridejos leg, showing a large crowd gathered in Kota Park with no regard to physical distancing, went viral.

They criticized government officials for not immediately addressing the issue.

The event was also attended by Presidential Spokesperson Harry Roque together with Cebu Governor Gwendolyn Garcia, Presidential Assistant to the Visayas Michael Lloyd Dino, the mayors from the three towns of Bantayan Island, and former candidates of Miss Universe Philippines 2020.

Department of Interior and Local Government (DILG) Secretary Eduardo Año earlier ordered for the investigation of the incident, together with a similar one that was reportedly graced by Senator Manny Pacquiao.

Photos taken by CDN Digital at the event showed that students, wearing school uniforms, were part of the crowd seen in Kota Park on November 27, 2020.

But according to Jimenez, face-to-face classes were still not allowed, and that a proposal seeking for its resumption remained pending before the national government’s anti-coronavirus task force.

He also said they did not receive any request asking if students would be permitted to go out of their homes for school-related activities.

“If the schools, teachers, and principals are involved in this, we did not receive any coordination from them,” said Jimenez.

Protocols from IATF-MEID or IATF (Inter-Agency Task Force for the Management of Emerging Infectious Diseases) and DOH (Department of Health) in the reopening of this school year last October stated that face-to-face classes would be prohibited.

In the meantime, Jimenez urged all schools in Central Visayas to adhere to anti-coronavirus protocols, and that they should ask permission from DepEd officials first before holding any school-related outdoor activities.

“Considering we’re under MGCQ (modified general community quarantine), they should really ask permission because there are policies,” he said. /dbs

RELATED STORY: Gwen to DILG: You can question me first