US soldiers no target in Sulu attack 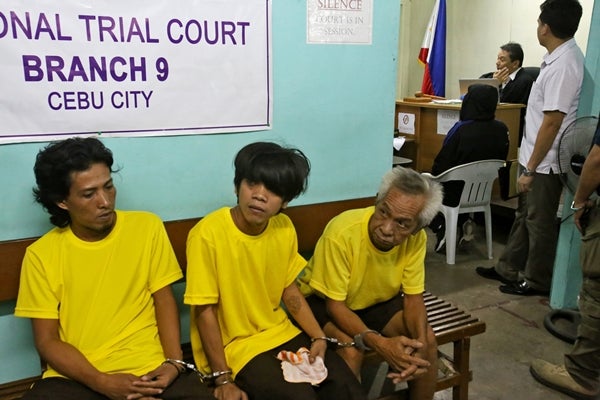 Members of the Moro National Leberation Front (MNLF) seated outside the RTC branch 9 as a witness (seated covered with jacket) to testify in court during the continuation of the hearing here in Cebu over the road side bombing that killed two US soldiers five years ago. (CDN PHOTO/JUNJIE MENDOZA)

A former member of the Moro National Liberation Front (MNLF) who claims to have access to the higher echelon of the separatist group yesterday tagged a certain Commander Tahil Sali as the mastermind behind the attack of a military convoy which killed two American soldiers and a Filipino marine in Sulu in 2009.

Arthur “Badi” Abtahi said he was the close-in security escort and cook of his cousin, Khaid Ajibon, the chairman of the MNLF in Sulu, who allegedly approved Sali’s plan to lay improvised landmines along a road where the convoy was to pass in Indanan in Sept. 2009.

He however, denied that the Americans were being targetted in the attack.

“The plan was aimed to inflict casualties among the Philippine Marines who will pass by the road along brgy. Kagay, Indanan, Sulu. The Americans were not the target there,” Abtaji explained in his dialect.

Staff Sgt. Jack Martin and Sgt. 1St Class Christopher Shaw and a Filipino soldier were killed in the attack. They were aboard a military Humvee which was leading the convoy when the blast occurred.

The US Embassy and the Philippine military officials initially said the Americans were members non-combatants, but the US Department of Defense identified them as belonging to the US Army Special Forces.

Abtahi, who was granted immunity from prosecution after he turned state witness, said about 40 MNLF fighters took part in the attack. He said the barangay captain of Kagay was advised by the MNLF to warn civilians not to pass along the road.

Explaining why he turned against the separatist group and agreed to testify against some of them, Abtahi said he made the move as he wanted to reform himself.

Only four of the 30 rebels who were linked to the attack are in custody. The trial was transferred to Cebu from Indanan in 2013 as a security precaution.

“I felt remorse about what we did in Kagay. It was not good. Lives of innocent persons were lost in that incident,” said Abtahi.

Abtahi, a resident of Kajatian, Indanan, said he became a member of the MNLF in 2007. “I was determined to join the MNLF because I had no job to support my family. I have five children to feed,” he said.

Abtaji said he thought that members of the MNLF would be integrated into the regular force of the military as mandated in the peace agreement signed between the MNLF and the Philippine government.