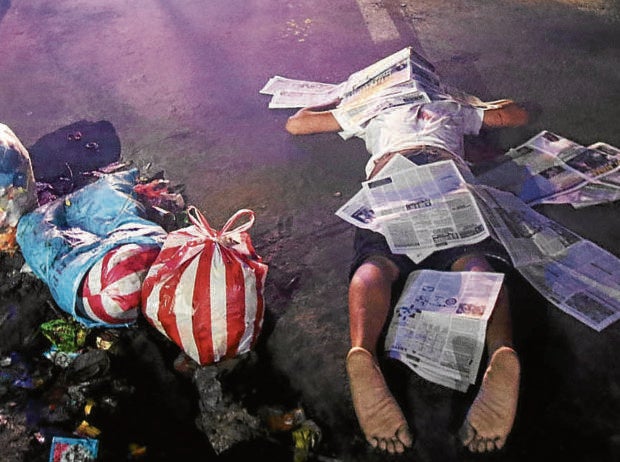 DEADLY POPULISM The drug war still has large public support despite mounting legal challenges to it both in the Philippines and abroad. —INQUIRER FILE PHOTO

MANILA, Philippines — It seems President Rodrigo Duterte’s brutal war on drugs not only incited thousands of extrajudicial killings but also served as political leverage for “outsider” mayors seeking to curry favor with his administration.

An upcoming US study reveals that independent and minority mayors — outsiders like Duterte was when he was mayor of Davao City —  implemented the drug war more aggressively than those from established political parties to win electoral support.

The study, “Deadly Populism: How Local Political Outsiders Drive Duterte’s War on Drugs in the Philippines,” shows that outsider-led municipalities recorded 40 percent more antidrug police incidents and 60 percent more police-related killings than their insider counterparts, in a costly bid to signal their loyalty to the administration.

To prove this, political scientists Nico Ravanilla, Renard Sexton and Dotan Haim pored over a million police records and news reports through Bantay Krimen of the Philippine National Police and the Armed Conflict Location and Event Data Project databases, as well as public procurement and 2016-2019 election data.

Ravanilla, Sexton and Haim are all assistant professors in the University of California San Diego School of Global Policy and Strategy, Emory University and Florida State University, respectively.

Their findings showed higher drug-related crimes in outsider-led municipalities, and that outsider incumbent mayors, most of whom had shifted to the President’s PDP-Laban party by 2019, performed better in the midterm elections by 5 percentage points than establishment incumbent mayors.

It was a reversal of electoral trends in previous midterms, where outsiders performed less than insider incumbents. By falling in step with Mr. Duterte’s signature policy, the outsiders were able to gain electoral support from his network, concluded the researchers, who spoke with the Inquirer on Monday.

The study fills a gap in existing studies that focused on the human rights aspects of the antidrug campaign. It explains how Duterte was able to realign the Philippine political structure around a populist policy, in the style of other political outsiders Donald Trump of the United States and Viktor Orban of Hungary.

In 2016, only 19 winning mayors nationwide were members of Duterte’s PDP-Laban, while 747 belonged to the Liberal Party (LP).

“The typical dynamic is that as soon as there is a new president, the tendency of everyone in the [House of Representatives] was to … jump ship into the patronage network of the sitting president,” said Ravanilla, the lone Filipino on the team. “[This immediate realignment was not seen] in the Duterte administration, because the President was a complete outsider.”

The outsider status of Duterte and the others was relative to Manila and national politics, not the political game as a whole.

Thus, to implement his more radical policies, including the war on drugs, Duterte needed to establish his own nationalized patronage network, Sexton said.

The study also showed that it wasn’t enough to switch in name — indeed, 90 percent of LP mayors had jumped ship by the midterms. They had to “buy into the network, too,” Sexton said.

While city police are still answerable to the PNP, local mayors hold wide discretion in commanding their own cops. Sexton said this explained the difference in national implementation despite the drug war “being dictated from the top.”

He added: “In terms of political implications, you now have a newly agglomerated network that’s sort of in full force by 2019, organized around the President, and the drug war played a core role in identifying who is in. It’s kind of like a litmus test. It’s a costly way of showing their loyalty to the President.”

Despite the implications on human rights, outsider mayors were more likely to take on Duterte’s drug war, Haim said, “because they didn’t have access to the traditional way of winning elections in a patronage democracy like the Philippines — namely, getting access to pork funds.”

According to the procurement data, outsider mayors got only half as much spending per capita in public works funds than their establishment counterparts, which, the researchers said, were traditionally used to skim funds for their campaign machines.

“So there is this tradeoff now,” Ravanilla said.”Those who were part of the insider network had access to existing patronage networks, so they did not implement the drug war as aggressively. [Ironically], if you had allowed [outsiders] to traditional sources of patronage, maybe they would have been less likely to take on this deadly drug war.”

The team did not name specific municipalities or mayors that fell into the pattern, hoping instead to prove that the dynamic was “generalizable,” Ravanilla said.

But by itself, the study — set to be published in The Journal of Politics in 2021 — provides significant implications for the Duterte administration.

For one, it shows how populist leaders can garner support even for controversial policies that involve human rights violations or illegal practices. It also shows how outsiders stand to gain electorally by aligning themselves with the national leader, especially when a policy like the drug war still proves popular in the next election cycle.

At present, the drug war still has large public support despite mounting legal challenges to it both here and abroad. But mayors can still face “future legal accountability” once political winds change, Sexton warned. “And that costliness is what makes it a valuable [political] signal.”

Added Haim: “So far, we’ve seen very big benefits for local mayors who adopted this policy. [But what] are the consequences? The same types of questions exist for the Philippines—what will happen in 5, 10, or 15 years from now, and how those mayors will be viewed.” INQ