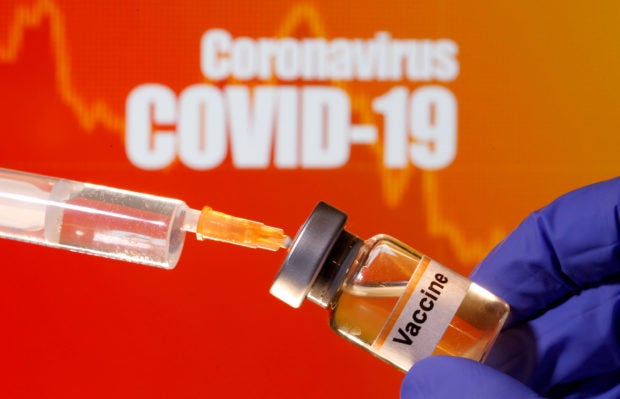 A small bottle labeled with a “Vaccine” sticker is held near a medical syringe in front of displayed “Coronavirus COVID-19” words in this illustration taken April 10, 2020 (file photo). REUTERS/Dado Ruvic

CEBU CITY, Philippines — Local government units (LGUs) and members of the private sector are advised to work closely with the national government on their plans to purchase coronavirus disease 2019 (COVID-19) vaccines.

Cebu City Mayor Edgardo Labella, on Sunday, December 27, said that this was the instruction from vaccine czar Carlito Galvez Jr.

“I just had a conversation with Secretary Galvez who said that whoever will purchase vaccines will have to course through to the national government,” Labella told CDN Digital in a phone interview.

Labella, who chairs the League of Cities of the Philippines (LCP), said their group sought Galvez’s assistance to clarify processes intended for the purchase of the vaccines.

Several LGUs in the country, including Cebu City, are planning to set aside millions of public funds for procurement of the highly sought out shots.

Labella said Galvez, who heads the government’s National Task Force against COVID-19, also mentioned that a ‘tripartite agreement’ between the national, local governments and the supplier must be made before the procurement would be pushed through.

“He said there should be a tripartite agreement between the supplier, national government, and the LGU. This is to do away with black market dealings, substandard quality, and fake products and medicines. Which is important to make sure and see to it vaccine purchases are made properly,” the mayor said.

Several national government agencies, such as the Department of Interior and Local Government (DILG) and even Malacañang, earlier said that LGUs might purchase vaccines for their constituents who would not be part of the priority population of the national government’s vaccination program.

However, they were subject to wide scrutiny, including by members of the Senate, over controversies surrounding the procurement of vaccines which included allegations preferring China’s Sinovac over cheaper options, and the botched plan to secure 10 million doses of Pfizer’s BioNTech, a deal that went to Singapore.

For his part, Labella said he welcomed the arrangement proposed by Galvez.

“I think the purpose here really is to prevent any black market dealings or naa bay mga palusot (questionable transactions). (Purchase of vaccines) it should be coursed through for proper monitoring and check-up,” he added.

Cebu City has allotted a budget of P500 million, under their Annual Investment Plan for 2021, to purchase additional shots intended for those who will not be covered by the national government’s priority list for inoculation.

But according to Labella, the council has so far approved P350 million.

“It’s P350 million for a start. This will augment whatever the national government will provide considering that the City of Cebu is one of the priority areas for the vaccine,” he said.

The Philippine government has allocated P72.5 billion for the purchase, storage, shipment, and distribution of COVID-19 vaccines in the proposed P4.5-trillion budget for 2021. /dbs

RELATED STORY: Duterte to US: No vaccine, no VFA