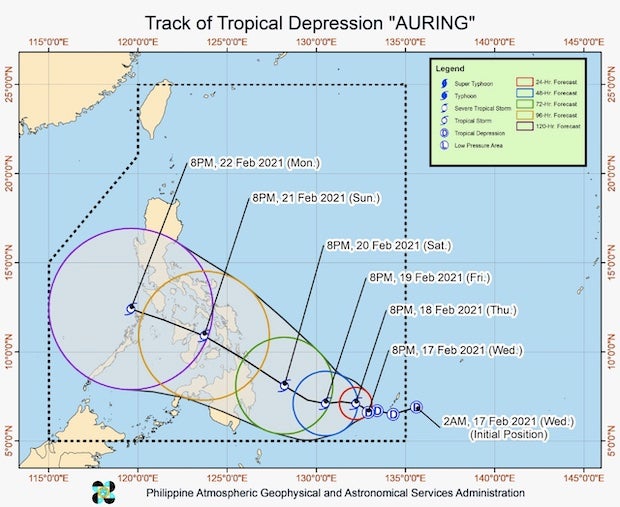 MANILA, Philippines—Storm signals may be raised over parts of Mindanao by Friday, February 19, 2021, due to Tropical Depression Auring, the state weather bureau said Thursday, February 18.

Benison Esteraja of the Philippine Atmospheric Geophysical and Astronomical Services Administration said Tropical Cyclone Wind Signal No. 1 is possible over the Caraga and Davao regions no sooner than Friday as the tropical cyclone picks up speed.

As of 3 a.m. Thursday, the center of Auring was spotted 715 kilometers east southeast of Hinatuan, Surigao del Sur, packing maximum sustained winds of 55 kilometers per hour near the center and gusts of up to 70 kph.

It was moving westward.

The trough or extension of Auring is expected to bring cloudy skies with scattered rains and thunderstorms over Eastern Visayas, Caraga and Davao regions on Thursday.

The northeast monsoon will bring cloudy skies with rains over Cagayan Valley, Aurora, Quezon and Bicol Region. Partly cloudy to cloudy skies are expected all over the rest of the country.

Auring is expected to make lamdfall  over the Caraga on Saturday evening or Sunday morning as a tropical storm, Estareja said.

Rains from Auring are expected from Saturday until Monday.

Read Next
Vaccines and economic stimulus