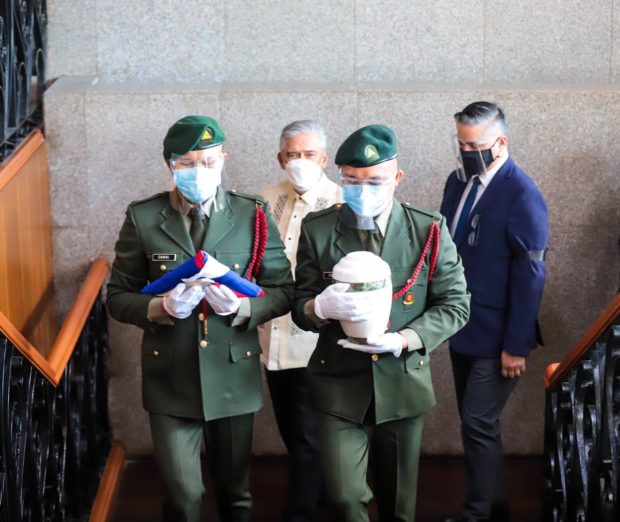 BACK TO THE PLENARY HALL: Honor guards escort the remains of former Sen. John Henry “Sonny” Osmeña to the Senate plenary hall in Pasay City, Thursday, March 4, 2021, where his former colleagues paid him a tribute. Dubbed the “Lone Ranger” for his “independent mindedness and fearless stance despite overwhelming odds,” Osmeña passed away last month at the age of 86. Also in photo are Senate President Vicente Sotto III (middle) and Osmeña’s son, John Henry Gregory. (Henzberg Austria/Senate PRIB)

MANILA, Philippines — The Senate paid tribute to former Senator John Henry “Sonny” Osmeña in a necrological service on Thursday, reminiscing his life and legacy as a “fearless” and “generous” public servant.

Osmeña, who was given the moniker “Lone Ranger” during his time at the upper chamber because of his independent-mindedness in matters of the Senate, passed away in his condominium unit in Cebu City last February 2 at the age of 86.

The cause of his death has yet to be disclosed, but his staff member said he was immediately cremated. In July 2020, Osmeña tested positive for the COVID-19 but soon recovered.

The late senator was brought back to the Senate gallery in an urn pursuant to government protocols on holding of wakes during the coronavirus pandemic.

The first person to deliver her eulogy was former Senator Nikki Coseteng, who had worked with Osmeña in the Senate during the 11th Congress.

From being one of the victims of the 1971 Plaza Miranda bombing and getting exiled to another country, to being diagnosed with colon cancer, contracting and surviving COVID-19. 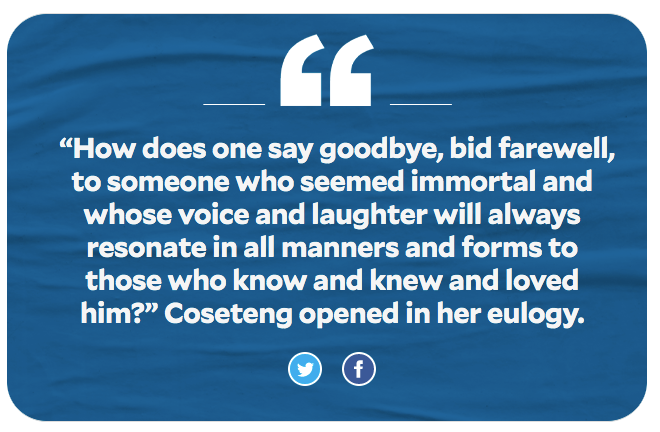 “Indeed he had been through a lot in his time. Sonny worked hard, fought hard, and played hard,” she said.

A friendship that transcended politics

Senate Minority Leader Franklin Drilon, meanwhile, highlighted the strong friendship and bond that he and the late senator had.

“I am forever grateful for our friendship that transcended politics, that stayed strong through the years,” he said.

Like Coseteng, Drilon remembered Osmeña’s contributions as a public servant. He also looked back at the lessons he learned from the late senator.

“I learned from Sonny how to provide fiscal space in the budget in order to fund projects that the legislators felt were necessary to be funded,” said Drilon, adding that Osmeña’s solutions to certain issues prove how “brilliant” and “experienced” he was as a politician.

Drilon further highlighted how he and Osmeña maintained their friendship despite having differences and eventually going separate ways as politicians.

“Although later we parted ways politically, we remained as close friends. The differences in politics and even in the alliances we forged in the course of our political careers did not create a chasm in our friendship,” Drilon mentioned.

He reflected on how Osmeña openly supported him amid the challenges he experienced during his term as Senate President in 2002.

“When he was mayor of Toledo City, I was running for another term in the Senate. We belonged to opposite camps but Sonny went out of his way to show his support for me,” he said.

Drilon also recalled the time when he was called by Osmeña to stay by his side and provide him comfort during a critical moment in his time.

“I remember when he had an angioplasty, he personally asked that I, together with Judy Araneta-Roxas, should be present to watch over him and provide comfort to him during that crucial time in his life,” he said.

“This gesture spoke volumes of our friendship,” he added.

Senate President Vicente Sotto III, in his eulogy, did not only recount the late senator’s accomplishments and contribution. He also paid tribute to the Osmeña family, who Sotto said the Filipinos owe a great debt of gratitude.

“There’s always an Osmeña casting his lot with the Filipino people along the important chapters of our nation’s history — from the end times of colonialism, to being a U.S. territory, a Commonwealth, up to the birth of the Republic of the Philippines and beyond,” said Sotto.

“And when the going got rough, be it the Japanese Occupation, a presidential election, Martial Law, an assassination or People Power Revolution, an Osmeña would be there always for freedom and democracy, suffering the confines of prison or fighting from exile,” he added.

As a final message to the late senator, Sotto thanked Osmeña for his work as a public servant and a role model. “An Osmeña may pass on and physically leave this earthly world, but their significant contributions in the building of our nation will forever remain,” Sotto emphasized.

“On behalf of the Senate and the Filipino people, we thank you and we will remember you for the good man that you were, and the inspiration that you have become for the Filipino youth and the generations to come,” the senator said.

“Your legacy will live on in the hearts and minds of the people, and your name will forever be etched in our country’s rich history,” he added as he finished his eulogy.

A complex, loving, and generous man

John Gregory “John-John” Osmeña, son of the late senator, who was present during the neurological service, thanked the Senate, especially Senate President Vicente Sotto III, Drilon, and Coseteng who gave their eulogies. 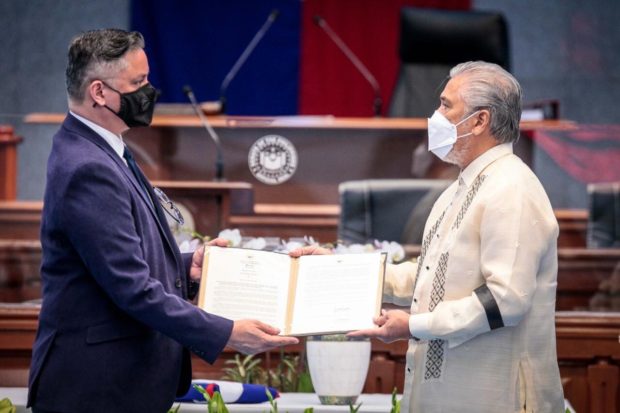 SOTTO HANDS OVER RESO TO OSMEÑA FAMILY: Senate President Vicente Sotto III (2nd, right) hands over Senate Resolution No. 85 to the son of former Sen. John Henry Osmeña, John Henry Gregory, expressing the Senate’s profound sympathy and condolences on the death of his father who passed away last month at the age of 86. John O, as he was popularly known at the Senate, was dubbed the “Lone Ranger” for his “independent mindedness and fearless stance despite overwhelming odds.” Also in photo is Senate Secretary Myra Marie Villarica (right). (Voltaire F. Domingo/Senate PRIB)

The younger Osmeña described his father as a generous man who had helped plenty of people in the past, a fact that he said has not been shared before to the public.

“He would help accident victims by sending them to the hospital in his vehicle with a blank check to cover expenses, never asking for recognition or repayment,” he said. “He did this not once or twice but repeatedly.”

He continued by telling a story about a pregnant woman, whom the late senator once helped when he was in a hospital in Negros. The son of the same woman, John said, “grew up to be the man that took care of my dad in his final days.”

Such was a testimony to the late senator’s unpublicized virtues, he said.

“Johnny ‘Sonny’ Osmeña was a complex man. He was a loving father, a generous friend, an impeccable senator, and a humble humanitarian. He will be missed,” his son said.