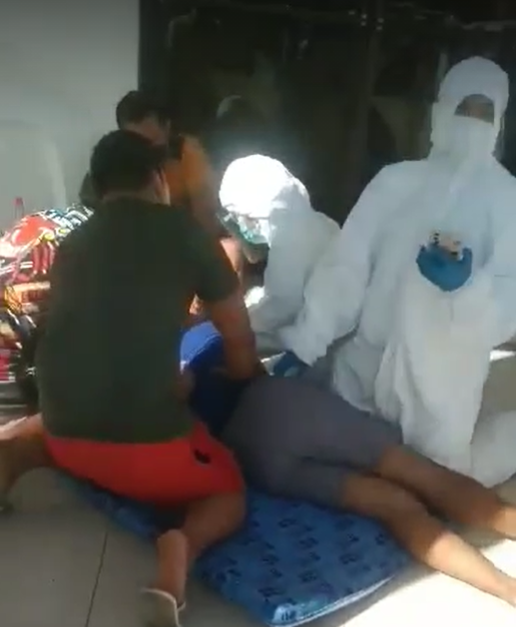 LAPU-LAPU CITY, Cebu- Mayor Junard “Ahong” Chan has ordered the deployment of more healthcare workers at the Hoops Dome in Barangay Gun-ob, which serves as the alternate isolation facility for coronavirus disease 2019 (COVID-19) positive patients in the city.

But Chan clarified that his order was not influenced by the recent death of one of its occupants who suffered heart attack.

He said that the move was in accordance with the recommendations of Nagiel Bañacia, the head of the Disaster Risk Reduction and Management Office (DRRMO), as a means to improve the current set up at the facility.

Netizens posted on social media a video of a man who suffered heart attack while inside the facility on Friday, March 19.

The video showed that other patients, who are also recovering from their infection, were trying to help the man.

It took a while before help finally came.

Chan said that based on the investigation that he ordered, he found out that the deceased patient was from Toledo City.  He was brought to the quarantine facility after he tested positive for COVID-19.

The patient, Chan said, has been staying at the isolation facility at the Hoops Dome for six days and was scheduled for a retest when he suffered heart attack on Friday.

(Based on the DRMMO investigation, the patient was sitting on his assigned sleep area when he suddenly lost consciousness, collapsed.)

Chan said that DRRMO personnel tried to revive the patient by administering Cardiopulmonary resuscitation (CPR) and brought him to the hospital, but he was already dead.

The patient, he said, failed to disclose upon his admission to the facility that he had an existing condition.

Chan also clarified that he was not blaming anyone for what have happened.  He does not also blame patients who broke a door at the isolation facility while trying to rescue the man who suffered heart attack.

Under the current set up, Chan said that only patients for admission and those under monitoring are allowed to use the Hoops Dome’s entrance door.  Those who are exiting the facility are to use its back doors.

Chan said that Bañacia already pointed out to him the need to improve the current set up at the facility.

He said that 20 more healthcare workers will be assigned at the Hoops Dome and the Lapu-lapu City College that is also being used as an isolation facility by the city to make sure that more personnel will attend to the needs of those who are recovering from their infection.

And even if the patient, who suffered heart attack, is not from the city, Chan said, the city government will provide him coffin, shoulder his hospital bills, and facilitate the transport of his remains to Toledo City. / dcb