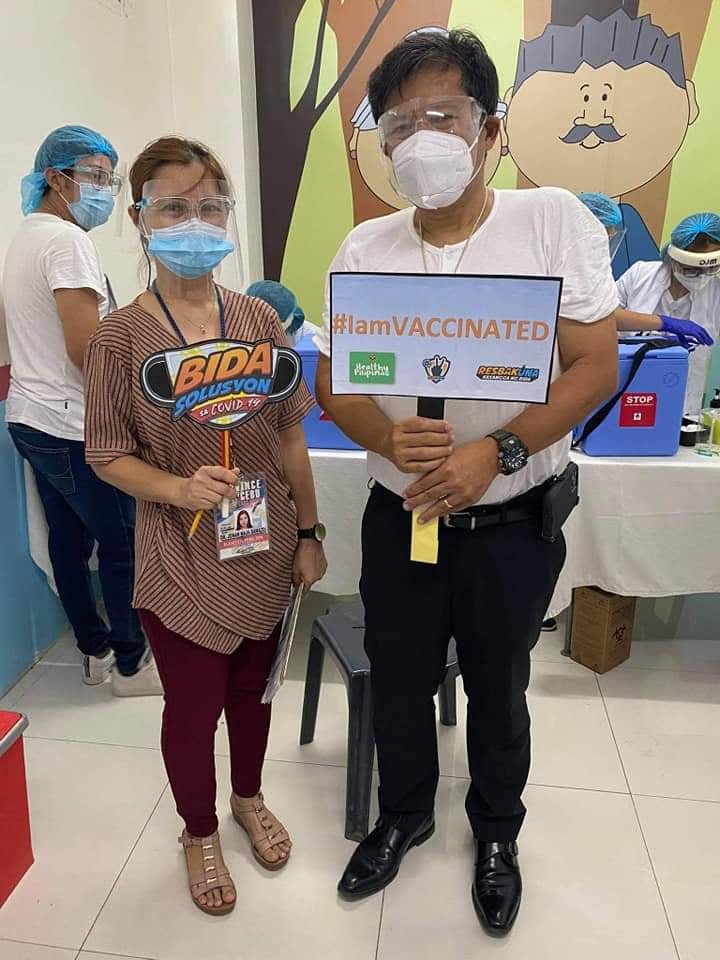 Minglanilla Mayor Elanito Peña confirmed to reporters on Tuesday, March 23, 2021, that he was administered with the first dose of AstraZeneca’s COVID-19 vaccine. Peña said as the chief of the town’s COVID-19 task force, he is considered as a ‘frontliner’. | Photo from Local Government Unit of Minglanilla

CEBU CITY, Philippines – The Department of Interior and Local Government (DILG) on Wednesday, March 24, 2021, announced it will be issuing a show-cause order against Minglanilla Mayor Elanito Peña.

In an interview with state-run Radyo Pilipinas, DILG Undersecretary Epimaco Densing III said they will be sending Peña a show-cause order to explain why he received the first dose of AstraZeneca’s vaccine on Tuesday, March 23.

Peña earlier confirmed that he was injected with the first dose of coronavirus disease 2019 (COVID-19) vaccine manufactured by AstraZeneca last Tuesday.

He said he was considered as a ‘frontliner’ since he heads the town’s anti-COVID-19 task force, and that he was given clearance by other municipal officials to be inoculated.

READ MORE: Minglanilla mayor jabbed with AstraZeneca despite not being in priority list

The local government of Minglanilla, in a statement issued on Wednesday, said there were no medical frontline workers in the locality displaced when the mayor received the vaccine, and that the mayor did so in order to ‘boost public confidence and trust in receiving the vaccines’.

READ: The official statement of the Municipality of Minglanilla after its mayor, Elanito Peña, was vaccinated with…

“The act of Mayor Peña has encouraged the constituents of Minglanilla, including those health workers who are hesitant and undecided, to finally submit themselves to be vaccinated,” the local government unit (LGU) said.

They also said vaccination for Minglanilla’s barangay health workers, and members of the Barangay Health Emergency Response Team (BHERT) was made before Peña was injected with the first dose.

However, these claims would run contrary to Peña’s earlier statements that the municipal government kicked off its first day of vaccine rollout on March 23, the same day he got jabbed with AstraZeneca.

The Department of Health in Central Visayas (DOH-7) on Wednesday also said that Minglanilla only began its rollout of COVID-19 vaccines last March 17.

Dr. Mary Jean Loreche, spokesperson of DOH-7, said in a text message that their data showed two Minglanilla-based hospitals have begun rolling out their supply of COVID-19 vaccines since March 17.

These are San Lucas Hospital and Baking Medical Center, and not Minglanilla District Hospital, said Loreche.

Peña was not the only elected local official in the country confirmed to have been injected with COVID-19 vaccines despite existing guidelines from the national government, explicitly stating that medical and health frontline workers should be prioritized.

DILG on Wednesday also announced they have already given show-cause orders against five other mayors in the country.