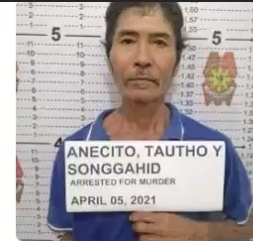 A photo of the Anecito Tautho, the suspect who killed a farmer in Sogod town on Monday afternoon, April 5, 2021. | Photo from Sogod Police Station

CEBU CITY, Philippines — Police in Sogod town in northern Cebu say personal grudge was the motive behind the killing of a 62-year-old farmer in Sitio Sacsac in Barangay Dakit on Monday, April 5, 2021.

The victim was identified by police as Arjiano Badayan while the suspect is 60-year-old Anecito Tautho.

Police Staff Sergeant Orlando Pepito, the investigator of the case, said that Badayan and Tautho had previous issues after the victim raised concerns regarding how the suspect maltreated his wife and his family.

Their animosity worsened on Monday, April 5, when both were intoxicated.

Under the influence of alcohol, the suspect and the victim walked into each other and ended up having a fistfight. The suspect  allegedly picked up a wood (batilis) and hit the victim in his head. When the victim fell to the ground, the suspect reportedly kicked his nape, which may have caused his death.

The suspect quickly fled from the area before witnesses helped the victim. After a few minutes, the suspect still went back with a bolo used in farming and asked the witnesses if the victim was still alive.

(The witnesses just told him that the victim might have passed out. Then he went back to his house.)

Witnesses then quickly sought help from Sogod Police Station. But since there was no cellphone reception in the area, as the village is located on a hillside, Pepito said that someone had to personally go to the police station to report the incident.

When police got to the area, they found the already lifeless body of Badayan. They then conducted a hot pursuit operation to arrest Tautho.

Witnesses told police that the suspect went directly to his house after the incident happened. Police indeed found Tautho inside his house and arrested him.

Pepito said Tautho did not show any remorse for what he did.

According to Pepito, the case is already closed and they are now preparing a murder case against Tautho, who is currently detained at the Sogod Police Station.