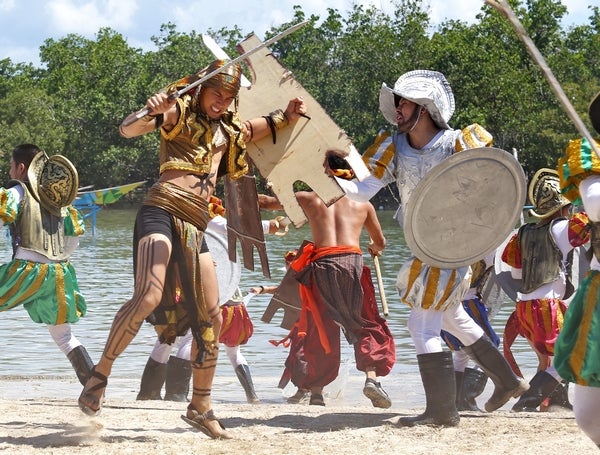 For the first time ever, the much-anticipated Battle of Mactan will not be reenacted on the shores of Lapu-Lapu City due to the COVID-19 pandemic. | DN File Photo Junjie Mendoza

LAPU-LAPU CITY, Philippines — The Lapu-Lapu City Government has already prepared 4,000 antigen testing kits for detecting Coronavirus Disease 2019 (COVID-19) for the visitors and participants of the 500th anniversary of the Victory at Mactan, in case President Rodrigo Duterte will attend the event.

According to Mayor Junard “Ahong” Chan, they are preparing these because the president might change his mind and would decide to grace the event.

Earlier, Chan said that there’s a possibility that the president would skip the activity, due to the rising case of Coronavirus Disease 2019 (COVID-19) in the National Capital Region (NCR) Plus, and after several members of the Presidential Security Group (PSG) have tested positive for the virus.

The chairperson of the City Tourism Cultural and Historical Affairs Commission (TCHAC), Cindi Chan, has also said that executive secretary Salvador Medialdea will be attending the celebration, as a representative of President Duterte.

“Right now, the guest of honor representing the president is his executive secretary Salvador Medialdea. Some cabinet secretaries and senators have confirmed their attendance,” Cindi said.

She added that the ambassador of Spain to the Philippines Jorge Moragas Sanchez will also be attending the said event. /rcg