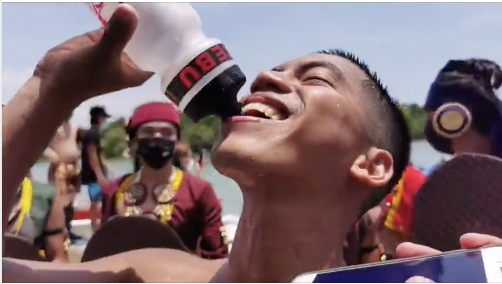 MANDAUE CITY, Cebu — Cebu’s “Little Merman” made history after he completed his swim around Mactan Island shortly before noon on Monday, April 26, 2021.

Oponganon Cleevan Alegres finished his more than 40-kilometer swim in 17 hours, 37 minutes, and 35 seconds. He arrived at the Liberty Shrine in Barangay Mactan at10:37 a.m.

With this, the 25-year-old open-water swimmer became the first person to swim around the island of Mactan.

Alegres started his swim at 5 p.m. on Sunday, April 25, from the waters of Barangay Punta Engño.

He reached the vicinity of Barangay Maribago at 10 p.m. and at around midnight, he was already near the roro port in Cordova town.

In a Facebook post, Lapu-Lapu City Mayor Junard Chan said that after swimming about 20 kilometers, Alegres made a quick stop at about 1:30 a.m. to wear his wet suit as he was starting to feel very cold. He also took something to eat.

(After more than eight hours of swimming he had two nutrition bars and he had 20-30 minutes of water and hydration intervals from 5 p.m. on Sunday, April 25, 2021.)

At about 7 a.m. on Monday, he already completed 32 kilometers of swimming and was already at the vicinity of the Nuestra Señora Birhen de Regla Parish in Barangay Poblacion.

Alegres admitted that his swim was not that easy, especially that he acquired cuts on his body after he encountered some sea urchins and sisi. Aside from this, he also felt the intense heat of the sun in the morning.

(I had cuts from my hands and I can barely move it now. It has many cuts from sisi and sea urchins.)

Aside from honoring Datu Lapulapu for the celebration of the 500th anniversary of the Victory at Mactan tomorrow, April 27, 2021, Alegres is also doing this to instill awareness to the public in protecting marine life, which is his advocacy as an open-sea swimmer.

While swimming, Alegres’ group has also been collecting garbage from the sea.

“Naa mi daghang nakolekta nga basura,” he said, adding that he believes that he has achieved his goals in promoting his advocacy.

(We have collected a lot of garbage from the sea.)

Alegres also received P42,000 from one of his sponsors, which is the Mactan Electric Company (MECO), as an incentive.

Aside from that, Alegres was also lauded by another popular open water swimmer, Ingemar Macarine, for his achievement of swimming around the 44-km Mactan Island in less than 18 hours.

Macarine also saluted Alegres for his advocacy on raising awareness to marine conservation and water pollution.

“Congratulations for a job well done,” Macarine said when asked what his message for Alegres was.

READ: A salute from one open-water swimmer to another

Mayor Chan, for his part, said that he was proud of what Alegres had achieved, especially that he was the first person that had circumnavigated the entire island of Mactan through swimming.

Chan said that he would also propose to the City Council to give Alegres an incentive of P100,000 because of his achievement.

“I will recommend to the city council to give a P100,000 to Cleevan as his incentive,” Chan said.

City Councilor Queenie Malingin-Amann, who also waited for Alegres to arrive at the Liberty Shrine, has promised to sponsor the resolution in giving an incentive to Alegres.