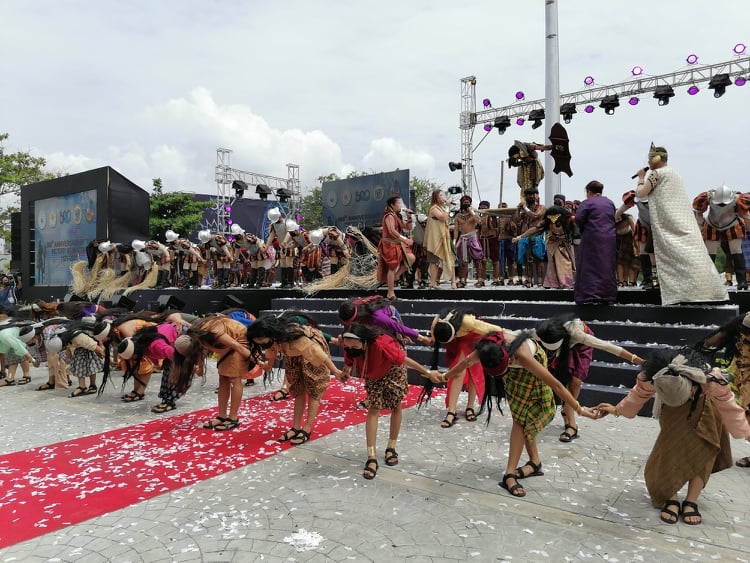 Performers take a bow after the April 27, 2021 reenactment of the Victory at Mactan held at the Liberty Shrine in Lapu-Lapu City. | CDN Digital photo / Morexette Marie Erram

LAPU-LAPU CITY, Philippines – The activities and the number of attendees for the 500th anniversary of the Victory at Mactan may have scaled-down.

But the event that culminated on Tuesday, April 27, at the very same site believed to be where Portuguese navigator and explorer Ferdinand Magellan was killed by Datu Lapulapu and his 1,500 warriors was still a success.

National and local government officials rejoiced that the reenactment of the quincentennial anniversary of the Victory at Mactan, also known as Kadaugan sa Mactan, was a triumph itself despite challenges due to the ongoing COVID-19 pandemic.

Among the changes introduced in this year’s Kadaugan sa Mactan was the Lapu-Lapu City Government’s decision not to hire celebrities to play major roles in the reenactment, and instead give the opportunity to local performers and talents.

Mayor Junard “Ahong” Chan announced that they are planning to continue this production arrangement in future Kadaugan sa Mactan festivals.

“We were trying to save expenses and in doing so, we were not able to hire actors and actresses… When we saw today’s performances from our local talents, including a National Arnis player, we were greatly impressed. And this is why we want to have local performers in the next (Kadaugan),” Chan said in Tagalog.

But City Hall officials later on decided to realign half of the allocation for the city’s COVID-19 response.

“(Nevertheless), we are really appreciative of the sponsors for our performers’ needs such as transportation, food. They started rehearsing, which ran for one month, until the event day,” she added in a mix of Tagalog and English.

Kadaugan sa Mactan is an annual festival celebrating Datu Lapulapu’s victory in defending the island of Mactan from Spanish invaders.

Being one of Cebu’s most popular festivals, celebrities are usually hired to play notable roles including the famed chieftain, Magellan, and Rajah Humabon.

Tuesday’s reenactment of the Kadaugan sa Mactan was the culmination of the nationwide quincentenary commemoration for the first circumnavigation of the world, spearheaded by the National Quincentennial Committee (NQC).

Malacañang created NQC as the clearinghouse of all events related to the quincentennial commemorations in the country. /dcb

IN PHOTOS: The reenactment of the Victory at Mactan

Arnis coach to play Lapulapu in Victory at Mactan reenactment