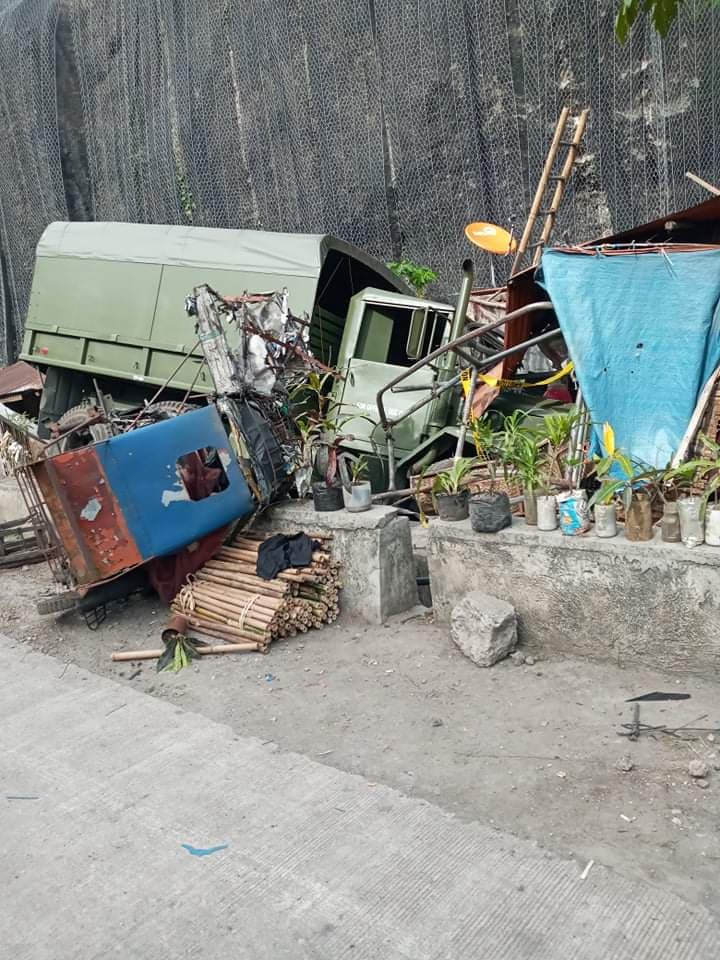 The wayward truck is in front of one of the houses it slammed into in a road accident involving 5 other vehicles in Sogod town, northern Cebu at past 1 p.m. today, May 2. | contributed photo via Paul Lauro

CEBU CITY, Philippines — A wayward 6×6 Army Truck plowed through a car, two pickup trucks, two motorcycles and two houses, causing the deaths of two men and injuries to four others at past 1 p.m. today, May 2, in Sitio Canduang, Barangay Damolog in Sogod town in northern Cebu.

Police Staff Sergeant Avito Mansing Jr., Sogod Police Station investigator of the accident, said that those who died were from the last motorcycle that the wayward Army truck hit before it crashed into the two houses.

Mansing also said that those injured included one of the motorcycle drivers and one occupant each from the two houses that it crashed into.

Initial investigation showed that the Army Truck driven by Private First Class (PFC) Gary Betonio Pagalong of the Philippine Army was heading to Cebu City from Borbon town in northern Cebu when the driver lost control of the vehicle negotiating a blind curve and downhill portion of the road.

Mansing said that Pagalong told him that he lost control of the vehicle then and crashed into the back of the Mitsubishi Mirage and then a pickup truck in front of him.

(The Army truck crashed into two houses at the side of the road injuring two persons there.)

(Four persons were injured in the accident. Including the two, who died the driver and backrider of the motorcycle.)

(According to the driver of the Army truck, he came from Borbon and was  negotiating the downhill portion of the road heading to Cebu City and when he reached the area, he lost control of the vehicle. He could not brake that is why he smashed through the vehicles and the houses.)

Mansing said the road was an accident-prone area in Sogod town since it was a ‘blind-curve’.

Mansing said that the driver of the Army truck was detained at the Sogod Police Station as they wait for the decision of the affected families and owners of the vehicles on whether to press charges or to settle with the driver.