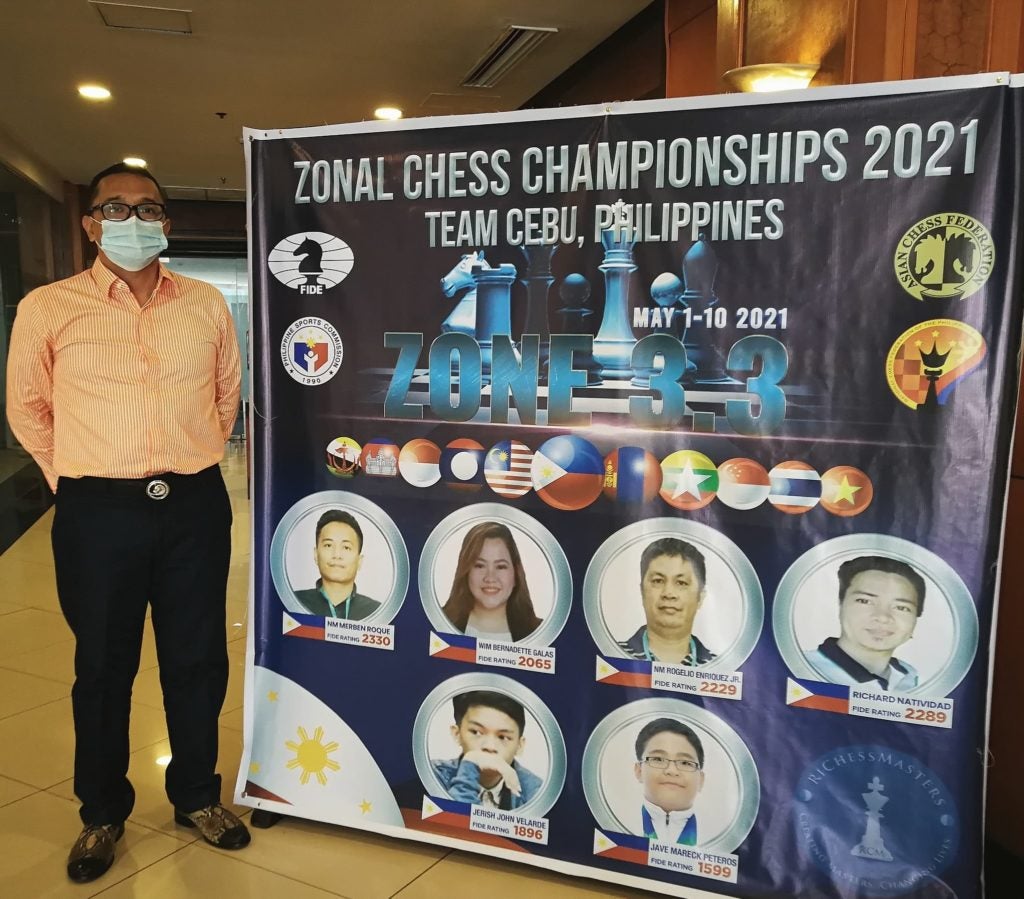 Ariel Potot, the founder of RiChessMasters, poses for the camera during the FIDE Asian Zonal Chess Championships, which his group hosted at the Cebu Parklane International Hotel. CDN Digital photo | Glendale Rosal

CEBU CITY, Philippines—A newly formed chess group based in the municipality of Cordova is aiming to produce the town’s first Fédération Internationale des Échecs (FIDE) or the World Chess Federation Master within a year.

The RiChessMasters, a group, formed during the height of the pandemic in July 2020, aims to produce the town’s first FIDE Master within a year by helping potential Cordova-born woodpushers, training them and organizing FIDE-sanctioned tournaments.

It may sound ambitious, but the entire group, headed by its founder Ariel Potot, is focused to making this goal a reality.

RiChessMasters got its first major break in the local chess scene by hosting the FIDE Asian Zonal Chess Championships 2021 at the Cebu Parklane International Hotel.

“Our group was established in July. It was formed amidst the pandemic. We needed to find a way to continue our mission to assist local chess players to get their norms and ultimately get their Grand Master (GM) titles,” said Potot.

He said that nobody from Mactan Island, particularly in Cordova, has a FIDE or Grand Master (GM) norm in chess.

“I realized during the pandemic, there’s a need to improve the quality of chess in our country, that is why RiChessMasters was conceptualized and established. Our tagline “creating masters, changing lives” means that we need to look in the bigger picture to produce chess masters, especially in Mactan Island. I’m from Cordova and it should start there,” said Potot.

To make their plans a reality, they will start by holding a monthly FIDE-sanctioned tournament to help local woodpushers improve their FIDE rating.

The ongoing Asian Zonals tournament itself requires a chess player to have at least a 1900 FIDE rating, but most local chess players have either a very low FIDE rating or have none at all.

“It is a hindrance for many potential players to compete in FIDE-rating tournaments such as the Asian Zonals because they have very low ratings or none at all. RiChessMasters would like to become the bridge of the gap of not having enough FIDE tournaments in Cebu,” added the 40-year old Potot.

They are also adapting a more scientific approach to help potential woodpushers improve their skills.

They wanted it to be available for everyone for free; that is why they’re planning to partner with LGUs.

“We streamlined to an educational module to help the kids understand more. We really have to produce a master in less than two years of our existence, so we have modules that is in the test process,” added Potot.

Read Next
Check out the 8 peaks accessible from Dalaguete