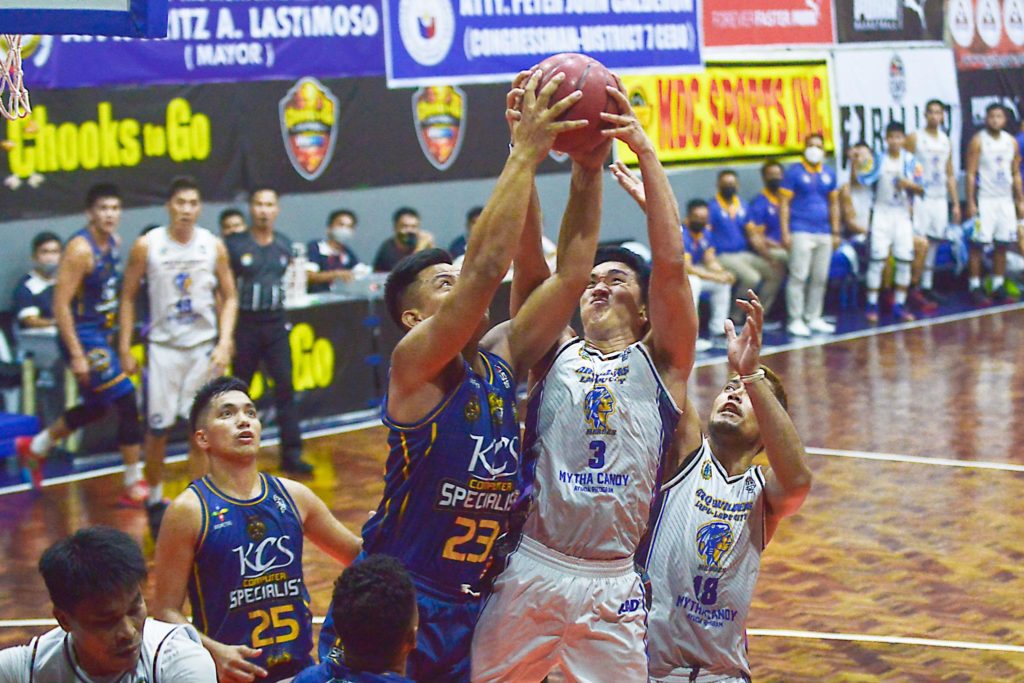 Dawn Ochea of the ARQ Builders (3) and Jonel Bonganciso (23) of the KCS Computer Specialists battle for a rebound during their semifinal showdown of the Chooks-to-Go Pilipinas VisMin Super Cup. | VisMin Super Cup Media Bureau

Their victory pushed the Heroes vs Specialists semis to a rubber match as the latter is holding a twice-to-beat advantage.

Their winner-take-all match is set for tomorrow evening at 6 p.m.

The Heroes relied on their ever-reliable veteran gunner Reed Juntilla who poured in 19 markers along with six rebounds, two assists, a steal, and a block.

While Juntilla took care of the perimeter scoring, Dawn Ochea held the fort inside as he scored 15 points and grabbed 16 rebounds for the Heroes.

With Juntilla and Ochea firing on all cylinders, ARQ raced off to a double-digit lead, 39-29 in the first half.

The Heroes also took advantage of the Specialists’ numerous unforced errors and horrible shotmaking for the surprisingly comfortable win.

“The big difference was everyone responded well. Everybody chipped in in their own little way,” said Heroes’ assistant coach Jerry  Abuyabor. “Kahit yung bench namin was so positive, talking and encouraging one another.

The Specialists, on the other hand, were plagued with errors, making only 16 of their 71 attempts from the floor for a dismal 22-percent shooting.

Nobody managed to score in double-figures for the Specialists with Al Francis Tamsi leading them with nine points and Shaquille Imperial adding eight.

KCS’s Gryann Mendoza was held down to just five markers after averaging 11.6 points during the regular season.

Read Next
More seniors get vaccinated in Mandaue City