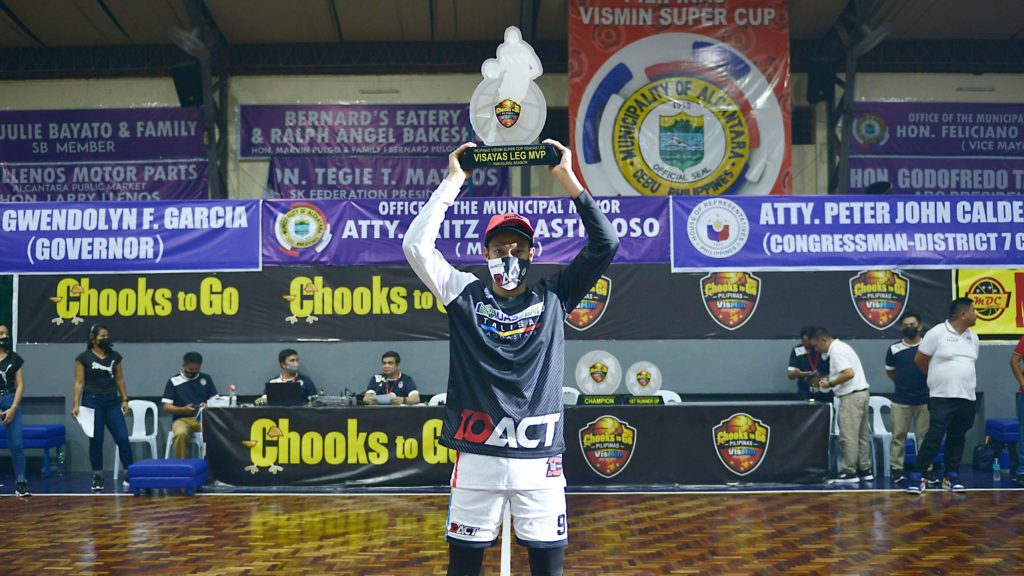 Jaymar Gimpayan of the Talisay City Aquastars lifts the Visayas leg’s MVP trophy during the awarding ceremony at the Alcantara Civic Center on Friday night, May 7, 2021. | Photo from VisMin Cup Media Bureau

The 6-foot-2 small forward, a product of Our Lady of Fatima University in Valenzuela City was officially crowned as the league’s top player in ceremonies that preceded Game 1 of the best-of-three finals series between the Aquastars and the KCS Computer Specialists-Mandaue City at the Alcantara Civic Center in Alcantara town, southwest Cebu.

Gimpayan played a big role in the Aquastars’ 10-game sweep of the elimination round, averaging 12.5 points (8th) and 8.9 rebounds (3rd) per game, along with 1.1 assists.

Marquez was the league’s leading scorer at 16.9 points per game. He is also the league’s sixth-best rebounder at 8.0 boards per contest while also tallying 3.5 assists (7th).

Lapu-Lapu brought Mandaue to the limit during the semifinals, eventually bowing in the win-or-go-home game last Wednesday, 64-74. /RCG

Read Next
Santa Fe mayor offers reward for info on robbers, who took P465K from family