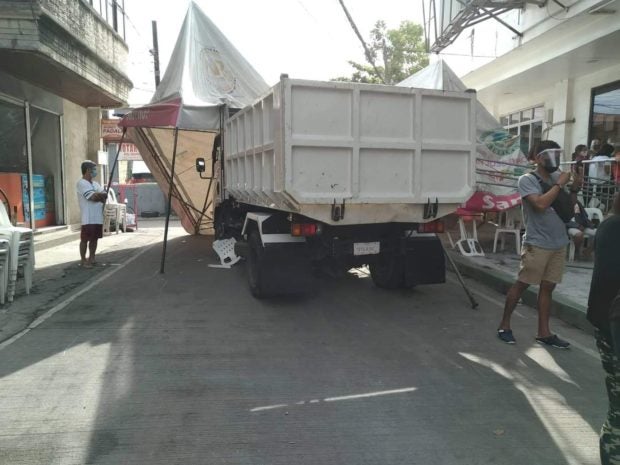 This dump truck owned by the government of City of San Jose Del Monte plows through a tent that serves as a waiting area for people lining up to get financial aid. Police said the truck driver succumbed to a heart attack. One was killed while four others were injured in the accident. Photo courtesy of Police Regional Office in Central Luzon

CITY OF SAN JOSE DEL MONTE, Bulacan –– A government dump truck plowed through a tent here, where people lined up to get financial aid, killing one of them and injuring four others on Tuesday, police said.

Investigators said the truck driver suffered a heart attack and lost control of the vehicle, which caused it to swerve to the roadside around 8 a.m.

Alvaro said Analyn Somooc, 54, a native of Iloilo City and a resident of Barangay Graceville, died while being taken to a hospital.

They were waiting for their turn to get financial aid from the government in a tent outside the city hall.

Ronald Soriano, city information officer, said the city government would shoulder the cost of hospitalization and funeral of the victims.

Mayor Arthur Robes and Congresswoman Rida Robes will also give financial assistance to the families of Gerona and Samooc, including those injured.

Read Next
Vandalism at St. Michael the Archangel Church: Who did this?