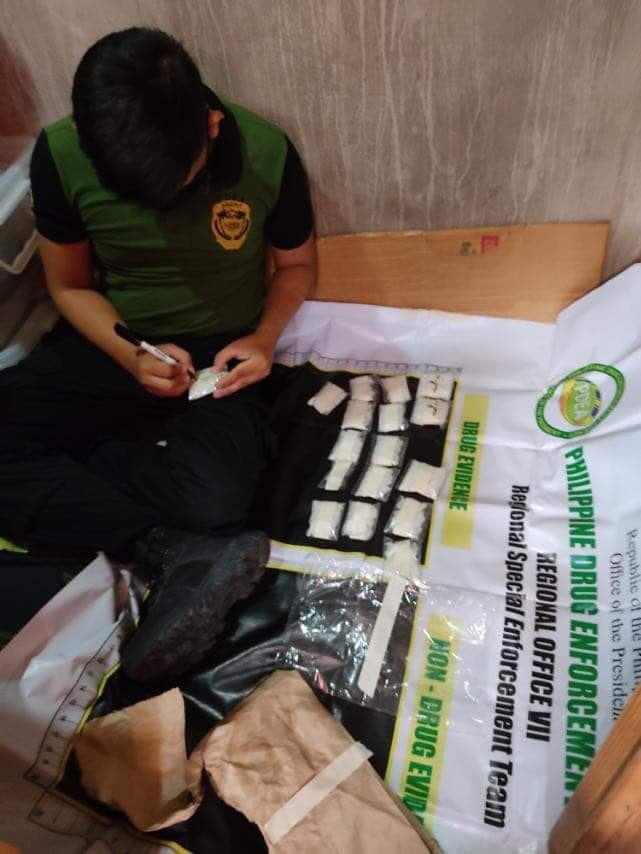 An agent of the Philippine Drug Enforcement Agency in Central Visayas (PDEA-7) does an inventory of the confiscated illegal drugs from a live-in couple in Barangay Suba, Cebu City. | Photo courtesy of PDEA-7

Information about a jailed drug dealer helping run an illegal drug operation in Barangay Suba, Cebu City while inside prison led to the raid in the barangay that yielded P3.4 million worth of suspected shabu.

The raid conducted by operatives of the Philippine Drug Enforcement Agency in Central Visayas (PDEA-7) in Block 2, Belgium Street of the barangay also led to the arrest of a live-in couple, whose contact for their drug supplies and customers, was the jailed drug dealer at the Cebu City Jail.

Leah Albiar, PDEA-7 spokesperson, said that the live-in couple — Jaime Gastador, 43, and Jocelyn Premacio, 47 — could allegedly dispose of a kilo of suspected shabu in a week in Metro Cebu.

Albiar said that with the information about the connection between the jailed drug dealer and live-in couple in Suba prompted PDEA-7 agents to coordinate with the personnel of the Bureau of Jail Management and Penology at the Cebu City Jail.

The coordination led to a three-week surveillance of the jailed drug dealer and the live-in couple in Suba.

This morning, at past 6 a.m., PDEA-7 agents secured a search warrant against the couple, searched their house and found 500 grams of suspected shabu.

Albiar said that the illegal drugs had an estimated Dangerous Drugs Board value of P3,400,000.

She said that Gastador and Premacio were detained at the PDEA-7 detention cell as PDEA-7 agents prepare to file illegal drug charges against them on Monday, May 17.