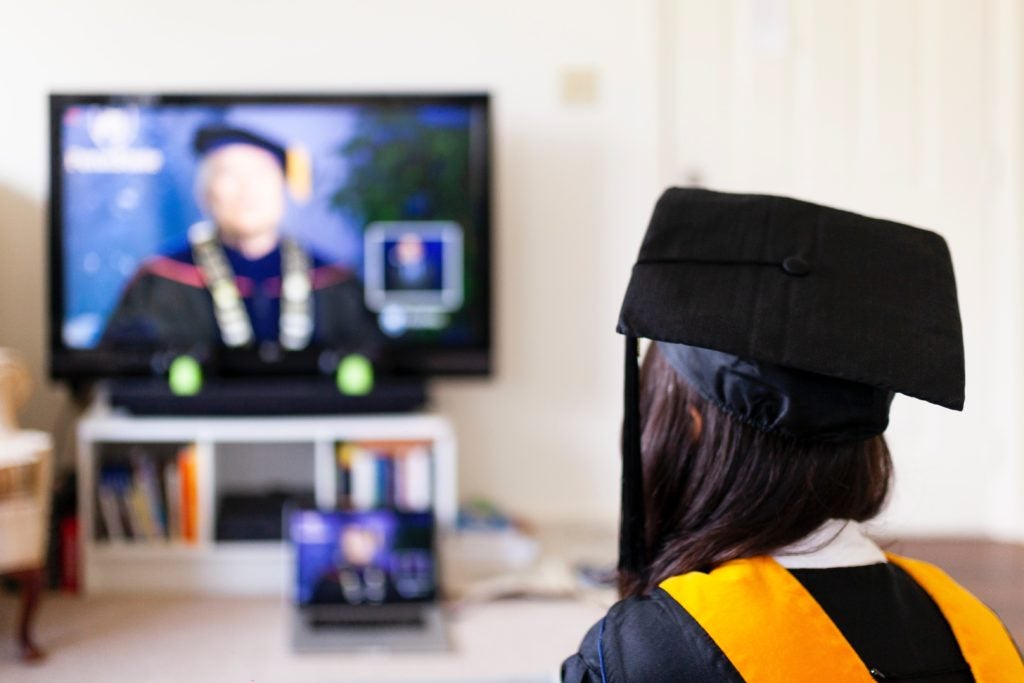 CEBU CITY, Philippines — Richard (not his real name) set up an improvised studio in his own room for their school’s upcoming virtual moving-up ceremony.

He borrowed his older sister’s video-making tools such as a digital camera, ring light, and a lapel microphone as he produced a pre-recorded video of him singing to their school’s hymn. The whole process, from preparation to recording back-ups, took him around two hours.

“It was part of our virtual moving-up ceremony. They ask all Grade 10 students to produce and send the video,” said Richard in Cebuano.

The 16-year-old student from Barangay Linao, Minglanilla will be transitioning from junior to senior high school.

He spent his junior high school years in a private school based in Talisay City, the neighboring locality of Minglanilla. Richard will be a Grade 10 student in the academic year 2021-2022.

And their school’s virtual moving-up ceremony is just among the many things Richard had adjusted to as the ongoing COVID-19 pandemic completely altered the education system.

“Some private schools have started the academic year 2020 to 2021 earlier than others, and that is why they are now preparing or have already conducted their moving-up and graduation ceremonies,” Jimenez told CDN Digital in a phone interview in Cebuano.

Public schools, on the other hand, have yet to start the fourth quarter of this school year, said Jimenez.

Moving-up ceremonies and commencement rites are widely considered as symbolic, owing to the fact that they highlight the youth’s progress in terms of education.

But for Richard, he already anticipated and accepted that such events in his school must remain in the virtual world as threats of the virus still lingered.

“I don’t know what to feel. I’m fine with the virtual ceremony because COVID-19 is still out there. (But) I do miss the part where we can mingle with our classmates and friends,” added Richard.

In Central Visayas, there are over 1.8 million students in the basic education levels, who enrolled for the school year 2020 to 2021, both from public and private schools.

For Richard, who aspired to be a doctor, the school year that is 2020 – 2021 was ‘definitely challenging at the same time uneventful’.

Particularly, when he failed several subjects during the first and second grading of this academic year as he tried to cope with the sudden changes in his learning process.

“I really had difficulties, and most of the time, I tend to procrastinate because I don’t know what to do,” explained Richard, who chose the modular type of learning instead of online.

Along the way, however, he learned several skills that were rarely taught within the four walls of his classroom such as video and audio editing, that he said really helped for his virtual moving-up ceremony.

“I’m actually glad I know how to edit videos and audio. Even my mother started to ask for my help every now and then,” Richard said in jest.

But Richard is not the only student who felt this way.

According to Jimenez, students – and even teachers – adjusting to the restrictions and changes brought by the pandemic have been one of the biggest challenges the educational sector faced for this school year.

“We know for a fact this school year has been challenging. Admittedly, we are not 100 percent prepared that everything will come down to this. Everyone had to hastily facilitate the transition of new modalities of learning just to ensure education will continue,” he explained.

Fortunately, cooperation from various sectors to ensure education will stay has helped the transition, said Jimenez.

“We are so grateful to all stakeholders who did their best, in any other ways, to make sure education will continue. The collaborative efforts contributed greatly,” he added.

DepEd-7 recorded 99 percent passing rates for students during the first and second quarter of the academic year 2020 -2021.

“We are hoping that we will observe the same outcome as we are about to end the third quarter, and start the fourth quarter for the school year,” Jimenez said.

DepEd: No definite date YET for school ‍opening