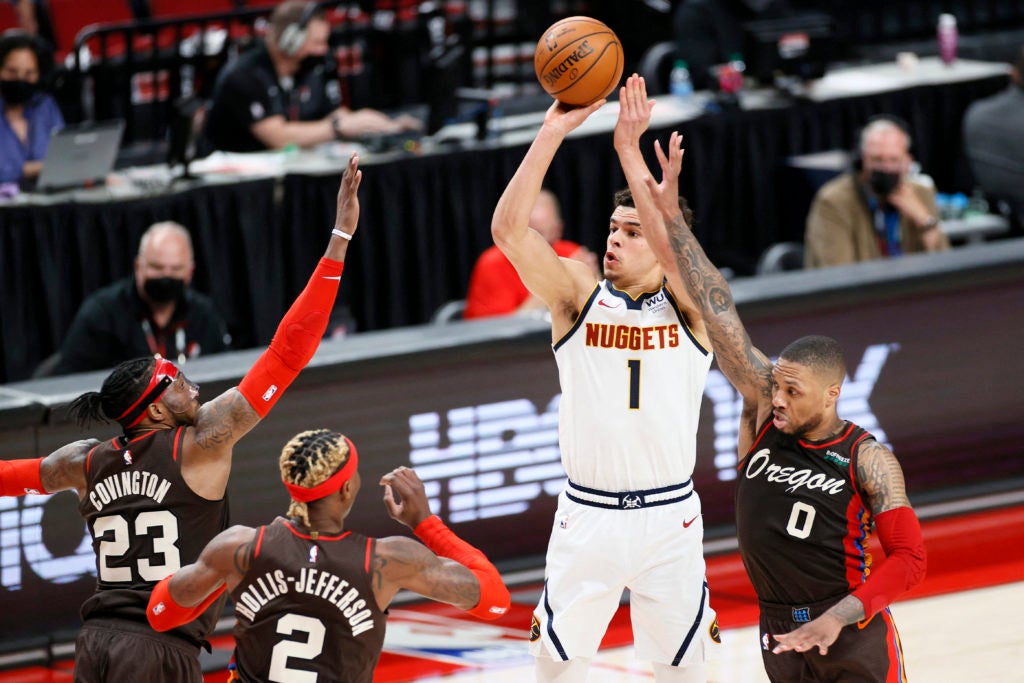 Michael Porter Jr of the Denver Nuggets shoots against Damian Lillard of the Portland Trail Blazers in the fourth quarter of Game 6 of the 2021 NBA Playoffs at Moda Center on June 03, 2021 in Portland, Oregon. | Photo by Steph Chambers / GETTY IMAGES NORTH AMERICA / Getty Images via AFP

The 7-footer went 13-of-22 from the field and added eight rebounds and six assists for the visiting Nuggets, who won the best-of-seven Western Conference first-round series four games to two.

Denver will face either the defending champion Los Angeles Lakers or the Phoenix Suns in the second round.

Denver’s Michael Porter Jr. scored 22 of his 26 points in the first quarter while Monte Morris added 22 off the bench for the Nuggets and Jokic had 20 points in the third quarter to spark a rally for the victory.

We made some big stops and scored some clutch baskets at big times,” Jokic said. “It was a team effort.”

The Trail Blazers seized a 14-point lead early in the third quarter but the Nuggets closed the period on a 14-4 run, then started the fourth on an 8-2 spurt to grab the lead and broke open the game in the final minutes.

“Nobody can take the fight out of us,” Jokic said. “We go out there and fight. Thats what we’re doing. We’re never going to quit.

“Quit is not in our vocabulary. We’re going to go out there and fight.”

With the game deadlocked at 108-108, the Nuggets went on an 11-0 run, featuring a 3-pointer and layup by Austin Rivers and a Jokic hook shot.

Portland trimmed the lead to 119-113 but Jokic made a layup and Aaron Gordon added a late 3-pointer to seal the Blazers’ fate.

Damian Lillard led Portland with 28 points and passed off 13 assists while C.J. McCollum added 21 points, Norman Powell had 17 and Carmelo Anthony scored 14 off the bench.