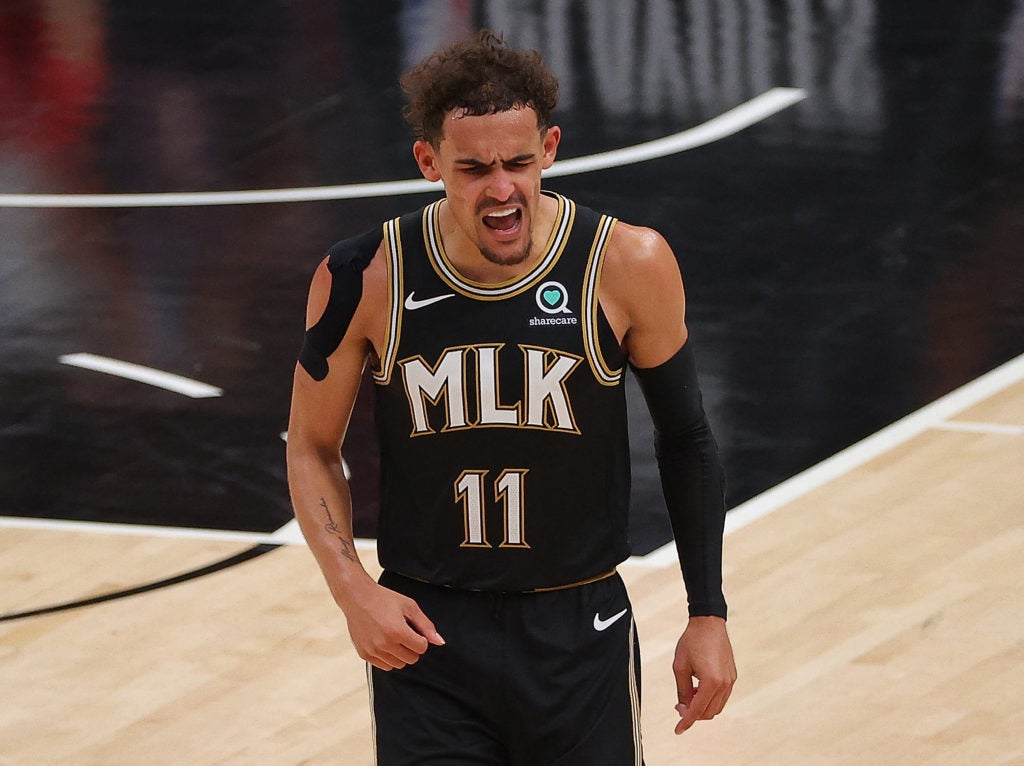 Trae Young of the Atlanta Hawks reacts after hitting a three-point basket against the Philadelphia 76ers during the second half of game 4 of the Eastern Conference Semifinals at State Farm Arena on June 14, 2021 in Atlanta, Georgia. | Kevin C. Cox/Getty Images/AFP

Young shot eight of 26 from the floor and drained three, threes but he had plenty of help from his supporting cast as all five Hawks starters finished in double figures to level the best-of-seven series at 2-2. The 18 assists equals Young’s career high.

Young also busted out from under the watchful eye of Philadelphia’s defensive specialist Ben Simmons who was given the task of guarding him. Simmons finished second this year in NBA defensive player of the year voting to Utah’s Rudy Gobert.

The fifth-seeded Hawks overcame an 18-point first half deficit then traded leads with the Sixers down the stretch but managed to hold on for the victory.

Tobias Harris had 20 points and Joel Embiid recorded 17 points and 21 rebounds for the top-seeded 76ers, who were outscored 54-38 in the second half. Simmons delivered 11 points, 12 rebounds, nine assists and two blocks.

Embiid, who averaged 35.3 points, 10.3 rebounds and 4.7 assists over the first three games of this series, is playing with a tear in his right lateral meniscus.

Young and Bogdanovic combined for seven threes as the Hawks improved their scoring from beyond the arc. Atlanta committed just four turnovers compared to 12 for the 76ers.

Read Next
‘Everything is possible’: Djokovic eyes Golden Grand Slam