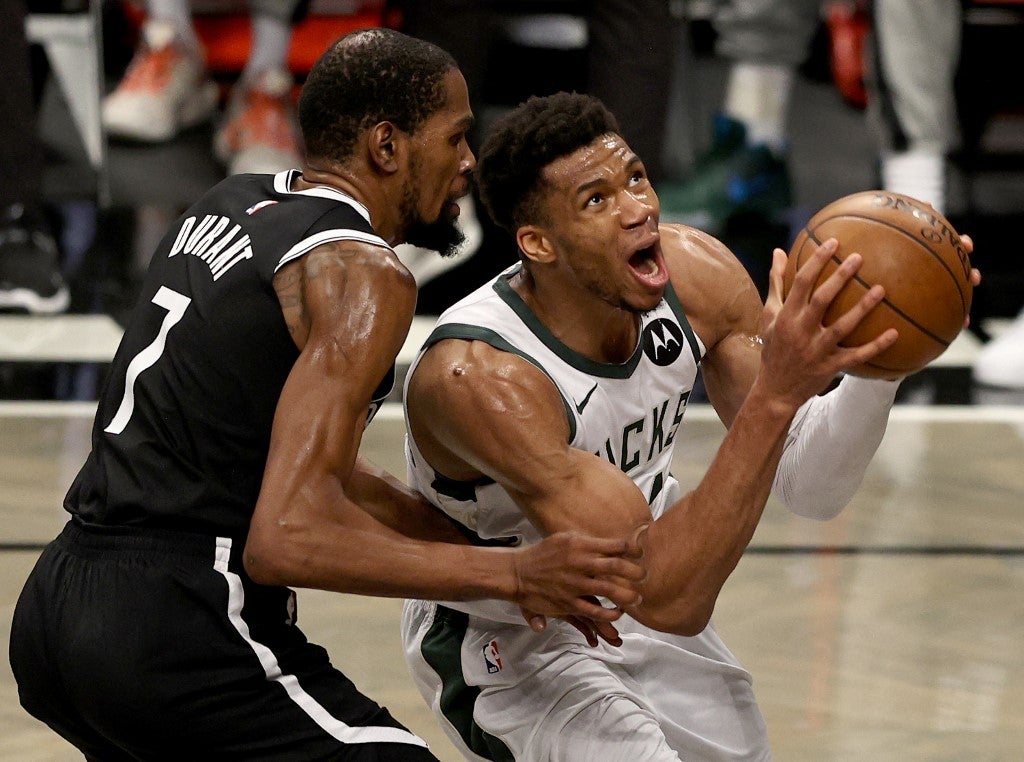 Giannis Antetokounmpo #34 of the Milwaukee Bucks heads for the net as Kevin Durant #7 of the Brooklyn Nets defends in the second half during game seven of the Eastern Conference second round at Barclays Center on June 19, 2021 in the Brooklyn borough of New York City. Elsa/Getty Images/AFP (Photo by ELSA / GETTY IMAGES NORTH AMERICA / Getty Images via AFP)

Giannis Antetokounmpo scored 40 points, including the tying basket in overtime and Khris Middleton hit the go-ahead shot with 40.7 seconds left as the Milwaukee Bucks pulled out a 115-111 victory over the host Brooklyn Nets Saturday night in Game 7 of the Eastern Conference semifinals.

The Bucks survived a 48-point performance by Kevin Durant, overcame losing the first two games, including a 39-point loss in Game 2 and advanced to the conference finals for the 10th time in team history and second time in three seasons.

Antetkounmpo capped a 15-for-24 shooting performance by hitting a turnaround hook shot in the lane over Kevin Durant with 72 seconds left and the Bucks took the lead for good when Middleton hit a fadeaway 12-footer just over 30 seconds later.

The Nets had taken a 111-109 lead on a putback by Brown 22 seconds into overtime and neither team scored until Antetokounmpo’s turnaround hook shot over Durant.

The third-seeded Bucks will face Sunday’s Game 7 winner between the Philadelphia 76ers and Atlanta Hawks in the conference finals.

The Nets forced overtime in dramatic fashion after blowing a five-point lead in the final four minutes of regulation. Durant forged a 109-109 deadlock when he hit a well-contested 23-footer over P.J. Tucker with 1.6 seconds left. Officials confirmed via replay that Durant’s toe was on the 3-point line.

Middleton added 23 points, 10 rebounds and five steals. Brook Lopez chipped in 19 and Jrue Holiday contributed 13 despite 5-for-23 shooting. The Bucks shot 43.9 percent, hit 15 3-pointers and survived Middleton and Holiday going a combined 14-for-49 from the field.

Durant went the distance for the second time in the series. He shot 17 of 36, knocking down four 3-pointers, from the field as the Nets shot 46.4 percent.

James Harden also went the distance in his second back from right hamstring tightness and added 22 points on 5-for-17 shooting as the Nets were without Kyrie Irving (sprained right ankle). Blake Griffin added 17 points and 11 rebounds and Bruce Brown contributed 14 as the Nets lost a Game 7 in Brooklyn for the second time since the team moved there (also in 2013, first round against Chicago).

Brooklyn held a 101-96 lead when Harden banked in a 3-pointer from the left side as the shot clock wound down with four minutes left. Milwaukee tied the game at 101-all on a layup by Antetkounmpo with 2:45 left and took a 104-101 edge on a 3-pointer by Holiday 13 seconds later, but a shot-clock violation set up Durant’s dramatic shot at the end of regulation. 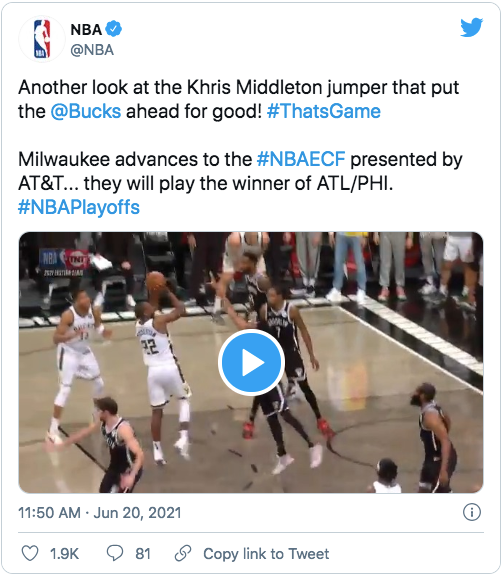 Read Next
Capitol preps for another Suroy-Suroy Sugbo