A telecommunications engineer from Calamba in  Laguna briefly stole the limelight at the finish line at yesterday’s IronMan triathlon after he — with the help of the organizers — used the day’s star-studded sporting event to propose marriage to his girlfriend. 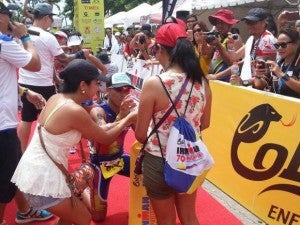 After the race, Cesario Gaconsismo propped open a banner asking “Will you Marry Me?” (CONTRIBUTED PHOTO)

Cesario Gaconsismo, 34, has been in a relationship with Kathrine Gonzales, 30, for four years. They were batchmates in college and eventually worked together in the same company. Gonzales is also a telecommunications engineer.

It did not initially crossed Gaconsismo’s mind to use the event as a stage when he registered for this year’s race.

“My co-workers asked me regarding my next race (Ironman). Then they asked about my proposal to her. Later on, they decided to help me work on it.”

Gaconsismo sent the organizers a message via a social networking site asking them if he could be allowed to carry out his plan. He got the green light a week before the race. A former colleague, Chique Reyes, who is among those working behind the scenes in this year’s IronMan helped him smoothen out the plan.

He said the original plan was to have somebody flash a tarpaulin sign where the “Will you marry me” message is printed when she crosses the finish line. Last minute changes made the plan “sweeter”.

“Instead of actually having someone open the tarpaulin, I was the one who did it. I felt the intensity,” he said.

Gonzales said she had no idea that this would happen on race day.

“I really did not know anything about it. They really know how to hide things,” she said./ Palompon University Intern Kristal A. Eduyan