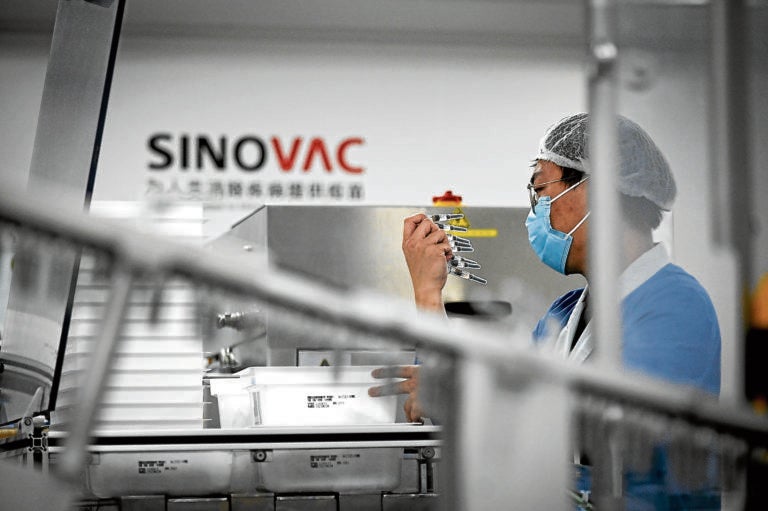 VACCINE PRODUCTION A worker inspects a batch of vaccines produced at a Beijing factory built by Sinovac, one of 11 Chinese companies approved to carry out clinical trials of potential coronavirus vaccines, in this photo taken in September 2020. —AFP

Researchers found that antibodies generated by the vaccine work less well against the variant than a previous coronavirus strain, while Gamma may also be able to reinfect people who had previously had the virus.

Gamma’s capacity to evade these immune system responses even in immunized people suggests that “the virus can potentially circulate in vaccinated individuals – even in areas with high vaccination rates,” the study authors said in a press release.

In the small study, researchers at the University of Campinas in Brazil exposed both Gamma and a previous strain of the virus to antibodies in blood plasma from 53 vaccinated people and 21 people who had been previously infected with the virus.

In the vaccinated group, 18 people had received just one dose of CoronaVac – one of the main vaccines in Brazil’s coronavirus response – while 20 had recently received a second jab and a further 15 had been vaccinated as part of the Sinovac clinical trial in August 2020.

They found that Gamma was able to escape the antibodies of almost all the participants who had received only one dose, as well as those vaccinated in 2020.

The antibodies from those more recently vaccinated were effective, but less so than against the previous virus strain.

The study, published in The Lancet Microbe, also found that antibodies produced by previous infections had to be nine times higher to prevent infection by Gamma than to prevent illness from the previous strain.

The authors said those results mean people who have already survived a case of COVID-19 could be reinfected.

But they said since clinical trials suggest the vaccine is effective in preventing severe illness and death, it could be that the immune response is more complex.

CoronaVac was approved by the World Health Organization (WHO) for emergency use in June.

At the time, the WHO said it had a 51 percent efficacy against symptomatic disease and 100 percent against hospitalization.

But results from CoronaVac phase 3 trials in Turkey – that did not take variants into account – published Friday in the Lancet found two doses of the vaccine had an efficacy of 83.5 percent in protecting against symptomatic infections.

It also found the vaccine was 100 percent effective against hospitalization.

The study involved 6,559 participants who received the vaccine and 3,470 who were given a placebo.

All were adults aged between 18 and 59 and were given doses 14 days apart.

The authors said the limitations of the trial include that the participants were under 60 and low risk, calling for further research to test efficacy among older adults and under 18s, as well as against new variants.

“The world needs every possible dose of any safe and effective vaccine against SARS-CoV-2,” they said.

Both papers are to be presented at this year’s European Congress of Clinical Microbiology & Infectious Diseases.

Read Next
Police: ‘Mentally challenged’ woman may have been mistaken for an asset