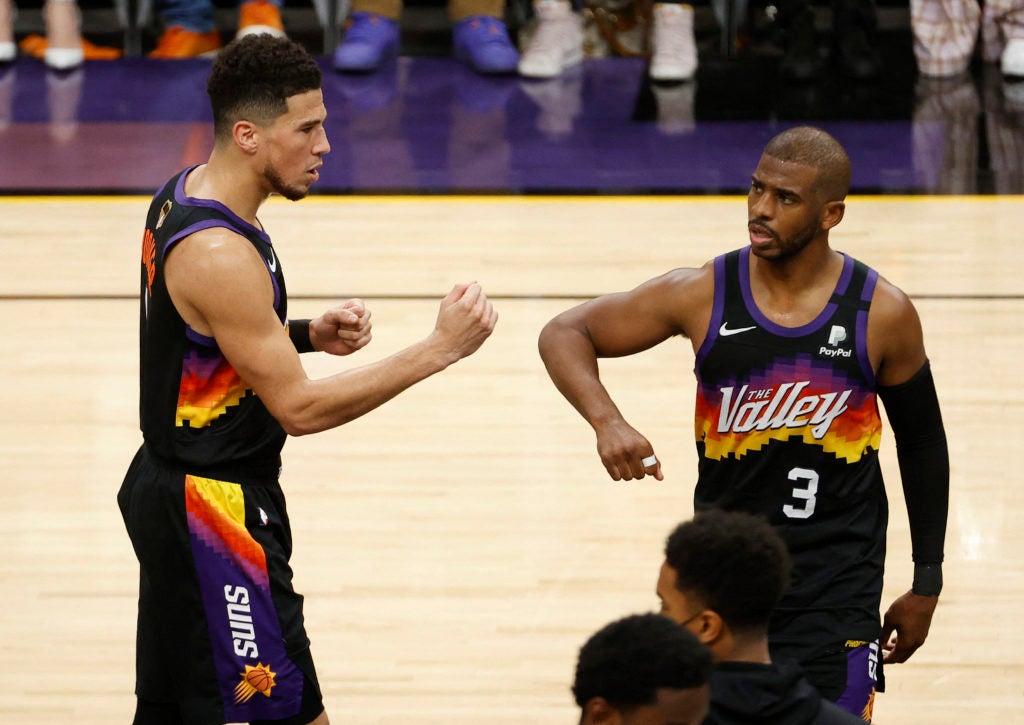 Devin Booker of the Phoenix Suns celebrates with Chris Paul against the Milwaukee Bucks during the first half in Game Two of the NBA Finals at Phoenix Suns Arena on July 08, 2021 in Phoenix, Arizona. | AFP photo

Phoenix, United States—Devin Booker scored 31 points and Chris Paul added 23 on Thursday to spark Phoenix over Milwaukee 118-108 and give the Suns a commanding lead in the NBA Finals.

Phoenix’s Mikal Bridges scored a playoff career-high 27 points for the Suns, who seized a 2-0 edge in the best-of-seven series, which shifts to Milwaukee for games three and four on Sunday and Wednesday.

“It’s a 0-0 mindset for us,” Booker said. “It’s a game-seven mentality for us. Every game is a game seven for us. It gets rowdy up there but we’ll be ready for it.”

Milwaukee star forward Giannis Antetokounmpo scored 42 points and added 12 rebounds, but the Bucks could not offer the 26-year-old Greek forward enough support to level the series.

The Suns seek their first NBA crown while the Bucks are trying to capture their first title in 50 years.

“We’ve got to just keep making it tough on them,” Bucks coach Mike Budenholzer said. “We’ve got to look at the film and keep working to get better against this group.”

Bahamas big man Deandre Ayton added 10 points and 11 rebounds for the Suns while Jae Crowder had 11 points and 10 rebounds for Phoenix, but the surprise effort came from Bridges, who hit 8-of-15 from the floor and 8-of-8 from the free throw line.

“We need that,” Booker said. “It takes a lot of pressure off everybody once we get it going on the offensive end.”

Phoenix outscored Milwaukee 15-4 over the final 4:40 of the second quarter to seize a 56-45 half-time lead.

The Suns, without a prior playoff loss after seizing a 10-point lead, let the Bucks shoot only 35.8% in the first half.

Antetokounmpo scored 20 points in the third quarter, the most by any player in an NBA Finals quarter in 25 years, but the Suns still led 88-78 entering the fourth quarter.

Paul responded with a 3-pointer and assisted on a Bridges’ layup, boosting the Suns’ lead to 108-97, and the Bucks came no closer than eight points after that.

“We had a 10-point lead and we just wanted to hold that,” Booker said. “We knew they would come out desperate. We defended well and made some shots at the end.”

The Suns lost swingman Torrey Craig to a right leg injury at the end of the third quarter just a day after losing Croatian forward Dario Saric with a torn right knee ligament.

Two-time NBA Most Valuable Player Antetokounmpo scared the Bucks when he fell to the court in the second and third quarters but he rose and continued each time. He missed two games with a hyperextended left knee and was only approved to play in the opener just before tip off.

The Bucks, who surrendered 25 points at the free throw line in the opener, went almost 16 minutes before being whistled for their first foul in game two.

Milwaukee drove inside repeatedly, outscoring the Suns 20-0 in the paint, while Phoenix went 8-of-14 from 3-point range in a first quarter that ended with the Bucks up 29-26. The Suns matched their first-game total of 11 3-pointers by halftime.