PNP chief: Guidelines for body-worn cameras need to be reviewed 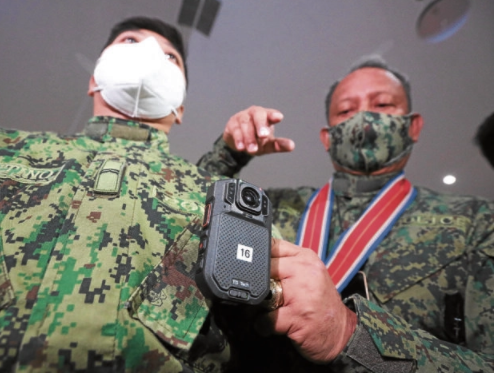 CEBU CITY, Philippines — The top official of the Philippine National Police (PNP) believes that there is still a need for them to review the guidelines that they drafted for implementation of the body-worn cameras.

Police General Guillermo Eleazar, PNP chief, said that this was because the implementation of body-worn cameras for policemen would be a big adjustment for them.

Eleazar said that they were closely coordinating and asking for guidance from the Supreme Court for finalized guidelines for this.

For Central Visayas policemen, Eleazar said that there was no definite date on the issuance of body-worn cameras for them, but he assured that they were already processing them.

He said that having body-worn cameras for the policemen would be a new step in ensuring the veracity and transparency in all their operations.

(What others are saying is that this will have a big effect on the PNP? The effect is for the good of all. It will change everything, including our training, including the culture of the PNP, because we see this as a true help for us.)

On the adjustments, Eleazar said that these included intensified information dissemination within and outside their organization to avoid misuse and misinterpretation of the purpose of having body-worn cameras in the view of civilians particularly.

Eleazar further said that initially, there would be at least 192 body-worn cameras that would be issued to the Police Regional Office in Central Visayas (PRO-7) soon, which will be used in police operations.

He said this would be to ensure accountability from the police and to the community.

(We provided each police unit a set. When we say one set, it consists of 16 body-worn cameras, and all of them are capable of livestreaming. But all those who would record that would include the command center.)

Eleazar also said that none of the municipal police stations will be issued for now with body-worn cameras, only the city police stations as included in their guidelines.

As an alternative, Eleazar said that police from these stations might use cellular phones as their recording device.

Recently, Eleazar mentioned their biggest challenge as policemen was for them to win the trust of the community and it would be a step in the right direction with this body-worn cameras.

The PNP chief said that the body worn cameras would protect the community from possible abuse from those in position and who had power that a policeman might commit during police operations.

(So in the same manner, our fellow countrymen would have to double being careful in front of the policemen and for the policemen, they should really know what to do that is really right.)

“This will be accountability to our police personnel in a way pati na yung mga pang aaboso or sabihin natin other infractions ng ating kababayan ay mapeprevent,” he said.

(This will be accountability to our police personnel in a way including  preventing what we say the abuse or other infractions from our fellow countrynmen.)

(Once and for all, this will be our validity for the unfair accusations against our policemen.)

SC vows ‘balanced’ rules on PNP use of body cameras

PRO-7: No body-worn cameras yet in the region