Isko vs Sara: The battle of mayors 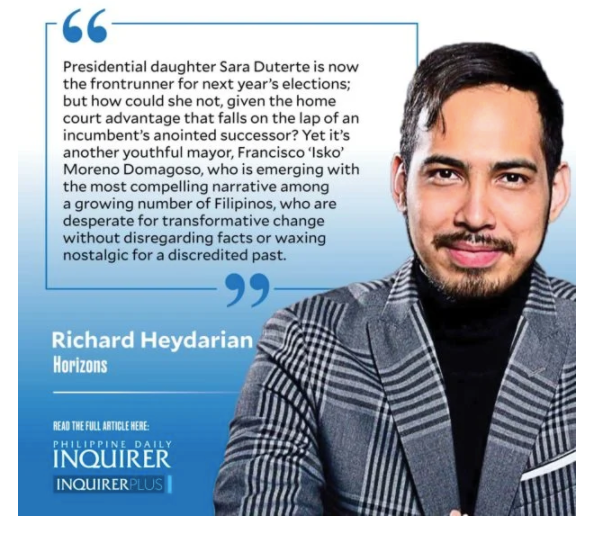 “A fiction, believed in even though you know it is a fiction, can be validated only by sheer will,” wrote Harold Bloom. The literary critic, arguably the greatest of his generation, had no less than Don Quixote in mind, but his observation is just as applicable to the most imperious populists of our times.

For half a decade, the Philippines has lived in the shadow of a self-assured populist who has defied all conventions without shedding an iota of power. Here is a man who nonchalantly promised to transform a broken nation in just over “six months,” thanks to his iron “political will.” Still, never did he bother, even years into his office, to offer any concrete blueprint for national rejuvenation; neither has he marshaled verified facts to back up his grandiose claims.

As President Duterte nears the end of his constitutionally mandated six-year term in office, the fiction of overnight (or, in his case, “six months”) transformation has collided with the great wall of political reality. No amount of performative populism can prevent the common folk from lamenting their lived experience as the Philippines hosts one of Asia’s worst COVID-19 outbreaks and its deepest economic meltdown.

The incumbent, however, seems determined to perpetuate the myth of populist “salvation” by chaperoning his very own daughter to Malacañang. Presidential daughter Sara Duterte is now the frontrunner for next year’s elections; but how could she not, given the home court advantage that falls on the lap of an incumbent’s anointed successor?

Yet it’s another youthful mayor, Francisco “Isko” Moreno Domagoso, who is emerging with the most compelling narrative among a growing number of Filipinos, who are desperate for transformative change without disregarding facts or waxing nostalgic for a discredited past.

The feisty and dynamic Davao City Mayor Sara Duterte is a force to reckon with, if not a force of nature herself. Those who are familiar with her style of governance will tell you that while she may share her father’s populist instincts, Sara is cut from a different cloth.

During a trip to Davao, an academic colleague pointed out how Sara’s philosophy of governance stands in stark contrast to her father’s, who is more visceral and top-down in his decision-making. Supporters have praised Sara for her proactive and more modern approach to governance, with an emphasis on multi-stakeholder consultations as well as collaboration with public policy experts. Independent-minded and strong-willed, Sara is seen by her supporters as a logical complement, rather than an addendum, to her father’s presidency. Thus, they argue, Sara’s historic task is to finish her father’s unfinished business in “imperial Manila.”

For critics, however, her prospective presidency is tantamount to a second term in office for her father, who seem eager to avoid accountability for his missteps in office. It’s indeed hard to see how the youthful mayor, regardless of her merits, could have ended up in the conversation for the nation’s highest office at all sans the popularity and power of the incumbent.

Here enters Isko, whom I described as the embodiment of a new synthesis in Philippine politics some years back.

After spending years in the shadows of titans, and with all the bitter lessons that tend to come with such tutelage, the Manila mayor has painfully learned the virtues of political independence. Isko is largely seen as his own man, with no family dynasty or vested oligarchs to lean on. Since he is steeped in the show-biz industry, performative politics comes naturally to him. As a family man, he also comes off as celebrating decency, piety, and instinctive compassion for the poor and voiceless, from whose ranks he came.

What makes Isko a compelling candidate is not only his truly humble beginnings in the slums of Manila, making him a natural champion of the “masa,” but also his sheer will to constantly improve his vocabulary of politics and learn from best practices across the world.

With the Manila mayor emerging as a top contender for the highest office next year, he must now choose the best possible running mate. Will it be someone who could help expand his Mindanao base? Or someone who can combine populist appeal with technocratic competence? Would he, as the race inevitably heats up, inadvertently end up as the de facto candidate of the opposition?

Read Next
P2.3M worth of ‘shabu’ seized in Mambaling drug bust