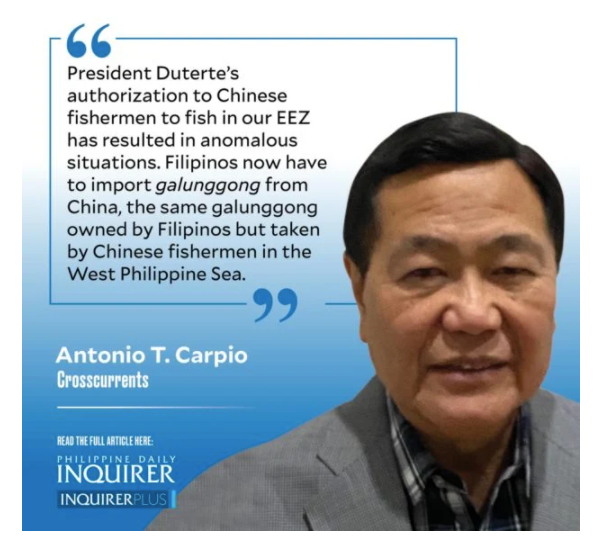 Two months ago, I had a Zoom meeting with fisherfolk from Zambales who complained that their fish catch had been dwindling because huge Chinese trawlers have been scooping the fish in their traditional fishing grounds in the West Philippine Sea, leaving them with smaller fish. Filipino fishermen use only wooden boats with outriggers that are dwarfed by the huge steel-hulled Chinese trawlers. Then last July 12, 2021, on the fifth anniversary of the landmark Arbitral Award, the Zambales fisherfolk sent me their statement again, lamenting their loss of income and livelihood because the hundreds of Chinese trawlers roaming in the West Philippine Sea have depleted the fish stock.

The maritime area in our exclusive economic zone (EEZ) in the West Philippine is larger than the total land area of all our islands put together. Under the UN Convention on the Law of the Sea, all the fish, oil, gas, and other mineral resources within this huge EEZ belong exclusively to the Philippines. This was expressly affirmed in the Arbitral Award. Our own Constitution mandates, “The State shall protect the nation’s marine wealth in its xxx exclusive economic zone, and reserve its use and enjoyment exclusively to Filipino citizens.” This exclusive right to the marine resources in our EEZ, including all the fish found within our EEZ, is a sovereign right of the Filipino people that cannot be bartered or given away by the President to China or to Chinese citizens.

In blatant violation of the Constitution, President Duterte has allowed Chinese fishermen to fish within our EEZ in the West Philippine Sea pursuant to what President Duterte says is his verbal agreement with China’s President Xi Jinping. At the very least, any derogation of Philippine sovereign rights, like the exclusive right of Filipinos to the fish within Philippine EEZ, should be embodied in a treaty and ratified by the Senate. In gross dereliction of their duty, the majority in the Senate have refused to inquire into President Duterte’s verbal fishing agreement with President Xi, thus allowing the verbal fishing agreement to be implemented by the Executive branch. The check-and-balance written in the Constitution, requiring treaties and executive agreements entered into by the President to be ratified by two-thirds vote of the Senate before they can take effect, has become totally useless.

President Duterte’s authorization to Chinese fishermen to fish in our EEZ has resulted in anomalous situations. Filipinos now have to import galunggong from China, the same galunggong owned by Filipinos but taken by Chinese fishermen in the West Philippine Sea. Galunggong, known as the poor man’s fish, is now more expensive than chicken or pork. When President Duterte assumed office in 2016, the average price of galunggong in Metro Manila was only P117 per kilo. Today, the average price of galunggong in Metro Manila is P200 per kilo and could go as high as P240 per kilo. In 2016, our total national galunggong catch was about 210,000 metric tons. In 2018, our total national galunggong catch went down to about 180,000 metric tons and have continued to decrease since then. By allowing the Chinese to fish in our EEZ, President Duterte has gifted to Chinese fishermen the income that lawfully belongs to poor Filipino fishermen.

President Duterte’s refusal to protect Philippine EEZ from poaching by Chinese fishermen is in stark contrast to the policy of Indonesia’s President Widodo. Chinese fishing boats encroaching on Indonesian EEZ are seized and burned by Indonesian authorities. President Duterte is the only head of state in the world who has welcomed Chinese fishermen to pillage his country’s EEZ. Tiny South Pacific island states impose fees per ton of fish catch on Chinese trawlers fishing in their EEZs. There is neither rhyme nor reason for President Duterte to allow Chinese fishermen, who operate the largest fishing fleet in the world, to fish in Philippine EEZ for free, at a time when poor Filipino fishermen have dwindling fish catch and poor Filipino consumers are reeling from the high prices of galunggong.

Duterte’s refusal to rescind is like telling our poor Filipino fishermen and consumers what he told our jeepney drivers: “Magtiis kayo sa hirap at gutom, wala akong pakialam.”