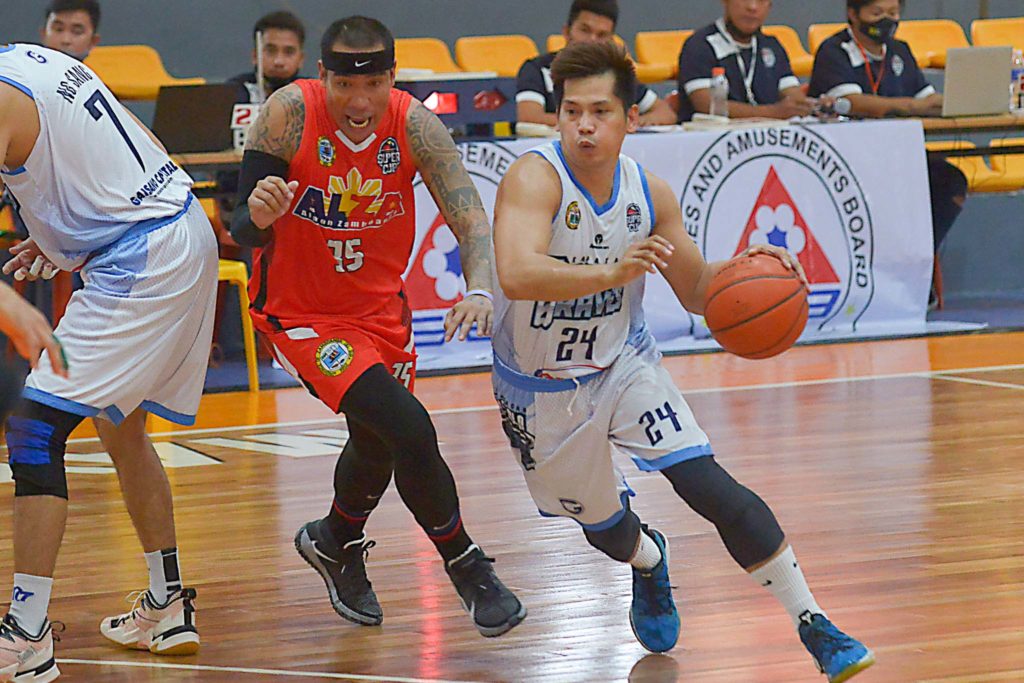 Marlon Monte (24) slips through the defense of Eloy Poligrates (35) during their game in the Mindanao leg of the VisMin Super Cup on Thursday, July 22. | Photo from VisMin Super Cup Media Bureau

It was the first victory for the Buffalo Braves in six games since the start of the Mindanao leg last July 7. Their win positioned them at eighth place in the standings behind ALZA Alayon with a 1-5 (win-loss) record, while the latter has a 1-2 card.

The Buffalo Braves unleashed a 25-5 run at the start of the third period. Eduard Doroteo capped the run with a two-pointer jump shot to stretch their two-point lead,48-46, into a 22-point blowout,73-51, at the 3:29 mark.

During that impressive scoring run, the Buffalo Braves went on a perfect 5-of-5 from the three-point area. Doroteo nailed two threes while Renz Palma, Marlon Monte, and Archie Iñigo hit their attempts.

Monte led Kapatagan by getting 25 points on 10-of-12 shooting, including 3-of-4 from the three-point area.

Doroteo came off the bench with 17 points, 7 rebounds, 3 blocks, and 1 steal, while Iñigo delivered 14 points, 7 assists, and 4 rebounds.

Veteran Dennis Daa continued his fine play at 42 years old for ALZA Alayon, dropping 21 points on a 7-of-10 clip to go with 8 rebounds and 2 assists.

However, their teammate Russell Moneva was stretchered out of the court after being inadvertently hit on the rib cage with 25.5 ticks left in the third quarter.

ALZA Alayon will have a chance to get back on the winning track tomorrow when they take on Roxas Vanguards at 4 p.m.

Kapatagan will close its elimination round campaign on Monday against the Vanguards at 2 p.m.