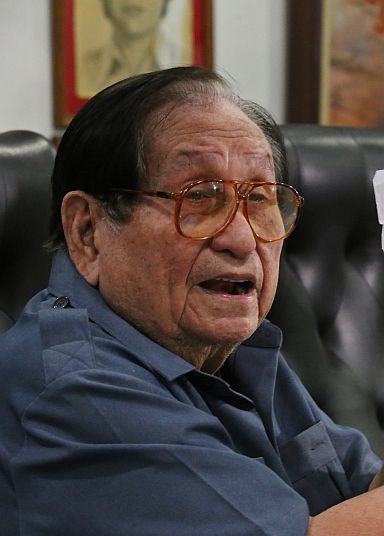 “He will be greatly missed by all who had the privilege of knowing him and working with him. We extend our deepest condolences and sympathies to his bereaved family, especially to his son and our colleague, Deputy Speaker, and Cebu 3rd District Rep. Pablo John F. Garcia,” he added.

“The Philippines just lost a great statesman, one whose achievements are unmatched. We will always remember you with much love and respect, Noy Pabling,” Ouano-Dizon said.

“A lifelong public servant, Noy Pabling’s legacy will be remembered by all the Cebuanos whose lives he has touched.

His good heart may have stopped beating but a heart that has touched so many lives can’t help but live on in those it loved,” said Cortes.

Dumanjug has flown the Philippine Flag in their municipal hall in half-mast to mourn the late politician, who hailed from their town.

The Cebu Provincial Government on Thursday announced that Pabling passed away on Wednesday evening, August 18. He was 95.

Pabling’s political career started in 1951 when he became a municipal councilor in Dumanjug.

He served as Cebu’s governor from 1995 to 2004. His most recent stint was being Cebu 2nd District’s Representative from 2007 to 2013 wherein he was also the House’s Deputy Speaker.

The family’s statement said that wake and interment services for the former governor will be limited to immediate family members due to current quarantine status restrictions.

“Further announcements on necrological services shall be made as soon as quarantine restrictions ease,” the statement read.

“The family requests prayers for his eternal repose, and privacy in this difficult time of profound grief,” it added.