Police on heightened alert during blackout 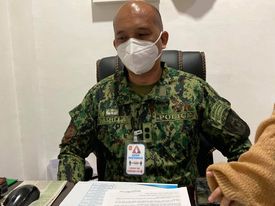 CEBU CITY, Philippines — While many of us were in the comforts of our homes when the blackout hit shortly before midnight on Saturday, policemen in Cebu City were placed on heightened alert to discourage criminal activities and prevent people from loitering on the streets.

Police Lieutenant Colonel Wilbert Parilla, deputy director for operations of the Cebu City Police Office (CCPO), said they were worried that criminals would take advantage of the dark and break into homes or commit other crimes.

Parilla said that when the blackout hit, personnel of the 11 police stations in the city were immediately deployed on the streets.

With a flashlight on one hand, policemen continued to go around city and barangay streets that are located within their jurisdiction.

As of this writing, Parilla said, they have not received any reports on the occurrence of crimes during the blackout.

The possibility of a power interruption was considered in their preparations for the implementation of “Oplan Puyo” that will require Cebu City residents to remain in their homes while the city is under Modified Enhanced Community Quarantine (MECQ), unless for work or essential purpose.

Parilla said that while the blackout may have slowed down the conduct of their night patrol, they still manage to implement “Oplan Puyo.”

READ: Lightning strike blamed for blackout affecting parts of Cebu and the Visayas

Meanwhile, personnel of the Cebu City Command Center continued to man their posts during the blackout to make sure that calls for assistance will be responded to. Lapu-Lapu City’s emergency vehicles were placed on standby during the duration of the blackout. | Photo courtesy of Junard “Ahong” Chan

In Lapu-Lapu City, Mayor Junard Chan said emergency vehicles and personnel were placed on standby so they could immediately respond to emergencies that may result from the power interruption.

(I still haven’t slept because I am watching over you. So far, we have not received any alarms or reports of any untoward incidents.) / dcb

Read Next
Celtics to retire Kevin Garnett’s jersey in March