Magsayo a sleep away from fulfilling his dream 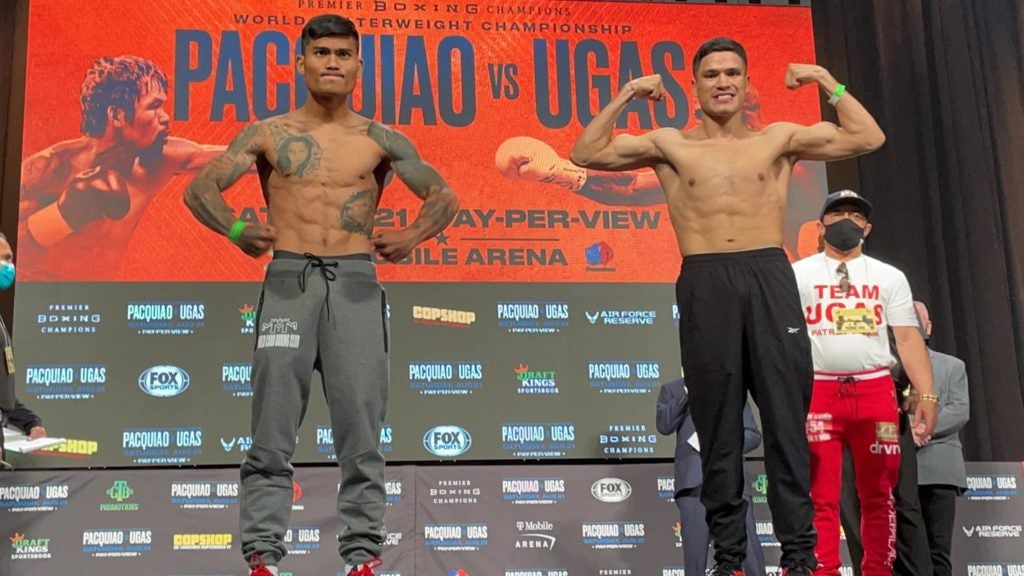 Mark Magsayo (left) and Julio Ceja (right) flex their ripped physique after passing the weigh-in for their world title eliminator bout in the undercard of Pacquiao-Ugas tomorrow. | Photo from Magsayo’s Facebook page.

CEBU CITY, Philippines — Mark “Magnifico” Magsayo is just a sleep away from fulfilling his dream of fighting in the undercard of eight-division world champion Manny “Pacman” Pacquiao after he hurdled the weigh-in for his fight against Mexican Julio “Pollito” Ceja tomorrow August 21 (August 22 Manila Time) at the T-Mobile Arena in Las Vegas, Nevada.

Magsayo, a self-confessed Pacquiao fan tipped the scales at 125.5 pounds while his opponent, Ceja weighed in at exactly 125lbs earlier today.

Magsayo and Ceja are scheduled to fight in a 12-round world title eliminator bout in the undercard of Pacquiao-Ugas WBA world welterweight duel.

The 28-year old Ceja sports a record of 32 wins with 28 knockouts along with four defeats and one draw. Ceja boasts of a very high 76% knockout percentage.

Ceja is an inch taller than Magsayo at 5-foot-7 but the Boholano boxer has a reach advantage of 68 inches against Ceja’s 63.5 inches.

Both boxers have the same orthodox stance. Ceja has not won a single bout since 2018 and is on a two-fight losing skid. He first lost his WBC silver super bantamweight title to Franklin Manzanilla in Mexico in 2018.

After that, he was knocked out by Cuban Guillermo Rigondeaux the following year.

His second shot for a world title came up short after he and Brandon Figueroa ended their WBA world super-bantamweight title bout in a split draw also in 2019.

Meanwhile, Magsayo continues to impress MP Promotions after he signed with the Pacquiao-owned boxing outfit in October 2020. Magsayo won all his bouts in the United States.

He scored a technical knockout victory against American Pablo Cruz (21-4-0, 6KOs) last April in Uncasville, Connecticut. Before that, he won by split decision versus Mexican Rigoberto Hermosillo in Los Angeles, California.