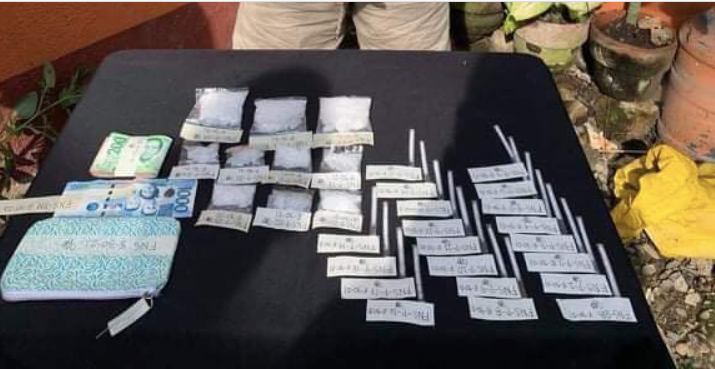 These are the P816,000 worth of suspected shabu and illegal drug paraphernalia confiscated from Ferdinand Sedillo of Barangay Luz, Cebu City during a buy-bust operation in the barangay this afternoon, August 30. | Contributed photo

CEBU CITY, Philippines — A former convict, who has just been released four months ago from the Cebu City Jail, will be behind bars again after he was caught with an estimated P800,000 worth of suspected “shabu” during a buy-bust operation in Barangay Luz, Cebu City on Monday, August 30.

Caballes said that the suspected shabu had a market value of P816,000.

He said that it took only four months for Sedillo to make it to the No. 2 of the watchlist of drug personalities of the Police Regional Office in Central Visayas (PRO-7).

Caballes said that Sedillo was released on April 21, 2021 after serving two years for illegal drugs at the Cebu City Jail.

Caballes also described Sedillo as one, who could allegedly dispose 200 grams to 300 grams of shabu in a week in barangays Mabolo, Lahug and other neighboring barangays.

He also linked an inmate inside the Cebu City Jail to have helped Sedillo in his illegal drug trade.

Caballes said that they monitored Sedillo and conducted a surveillance operation on him for two weeks to verify the report that Sedillo was back in the drug trade.

Police then conducted the buy-bust operation against Sedillo, which led to his arrest and the confiscation of illegal drugs.

But since the CCPO detention cells were still restricted because of at least 10 positive detainees there, who were still waiting to be transferred to the Cebu City Jail, then Sedillo was detained instead at the Mabolo Police Station detention cell pending the filing of charges.

Ex-convict arrested with P272K worth of shabu; back in jail