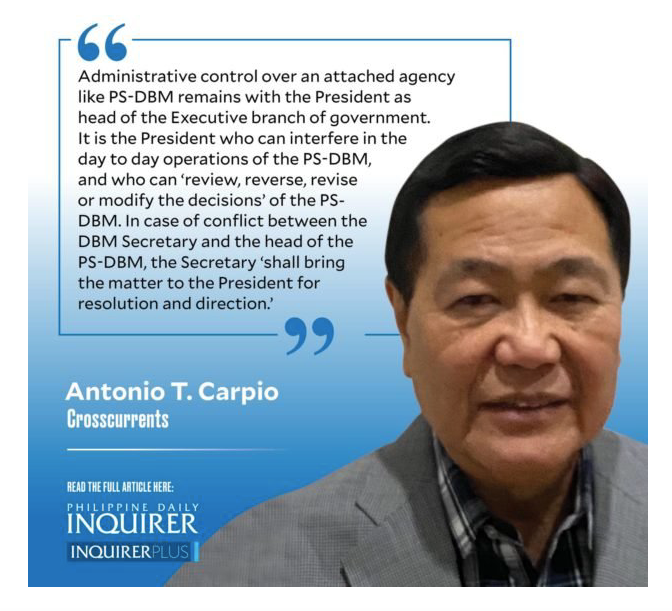 Second, administrative control over an attached agency like PS-DBM remains with the President as head of the Executive branch of government. It is the President who can interfere in the day to day operations of the PS-DBM, and who can “review, reverse, revise or modify the decisions” of the PS-DBM. In case of conflict between the DBM Secretary and the head of the PS-DBM, the Secretary “shall bring the matter to the President for resolution and direction.” In short, the real boss of Lloyd Christopher Lao when he headed the PS-DBM was President Duterte, who legally exercised direct administrative control over Lao when Lao entered into the questioned purchase contracts with Pharmally.

Fourth, Lao obviously enjoys the trust and confidence of President Duterte. In his 2019 State of the Nation Address, President Duterte told the nation that when the “Korean went to Malacañang just to complain why is it that there is no request for delivery” of the frigate, he instructed Bong Go, “Bong, ayusin mo yan.” Go’s office then sent a letter to Commodore Robert Empedrad requesting for a meeting in Malacañang. The letter was signed by Lao, a presidential appointee and Undersecretary in the “Office of the Special Assistant to the President,” the office of Bong Go. Clearly, Lao is part of the inner circle entrusted by President Duterte to handle sensitive matters.

Fifth, as a Palace insider Lao knew that the corporate officers of Pharmally, together with Michael Yang, had met President Duterte in Davao City in March 2017. The RTVM, the media arm of the Office of the President, had released photos and a video of that meeting. Undoubtedly, Pharmally officers have direct access to President Duterte through Yang, the Davao businessman and Chinese national whom President Duterte once officially appointed as his economic consultant.

Lastly, while Avisado has credibly washed his hands from responsibility for the P8.7 billion Pharmally contracts of PS-DBM, he has thrown President Duterte under the bus. President Duterte, as the official exercising direct administrative control over Lao, will have a harder time escaping responsibility for any overpriced purchase contract that Lao may have awarded to Pharmally.