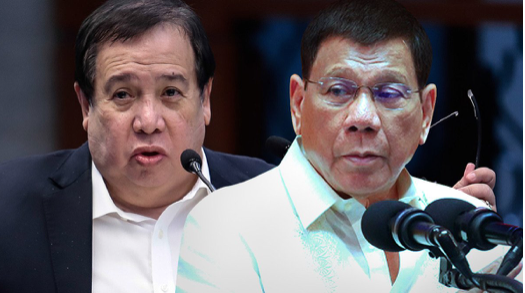 MANILA, Philippines — Amid a Senate probe on the alleged overpriced medical supplies bought by the government, President Rodrigo Duterte has threatened to find “what’s wrong” with senators, starting with Senator Richard Gordon.

“We will not want to control them but we would like also to just criticize them for… Alam mo wala kayong nakukuha dyan. You want a fishing expedition,” Duterte told senators during his taped briefing aired Saturday.

“Ganito na lang ang laro natin (this will be our game), you find your fault in us, and we will find what’s wrong with you… I’ll begin first with Sen. Gordon. I am sure I will find plenty,” he said.

Meanwhile, Duterte also mentioned several names as if giving a hint of what he knows about Gordon.

“Mr. Gordon kilala mo ba tong si Glen Tan ng Subic (do you know this Glen Tan of Subic)? Do you know him? Because he knows you very well. Well enough to talk about you.

“Itong si Gordon ginamit nya si Acierto (Gordon used Acierto). Acierto was a policeman… He was one of those responsible for the importation of AK-47 na pumunta sa mga kamay ng mga kalaban that went to the hands of the enemies),” he said.

During the briefing, Duterte also slammed Senator Franklin Drilon who is also questioning the procurement of alleged overpriced medical supplies.

Drilon, however, said senators will not be distracted by Duterte’s “malicious attacks.”