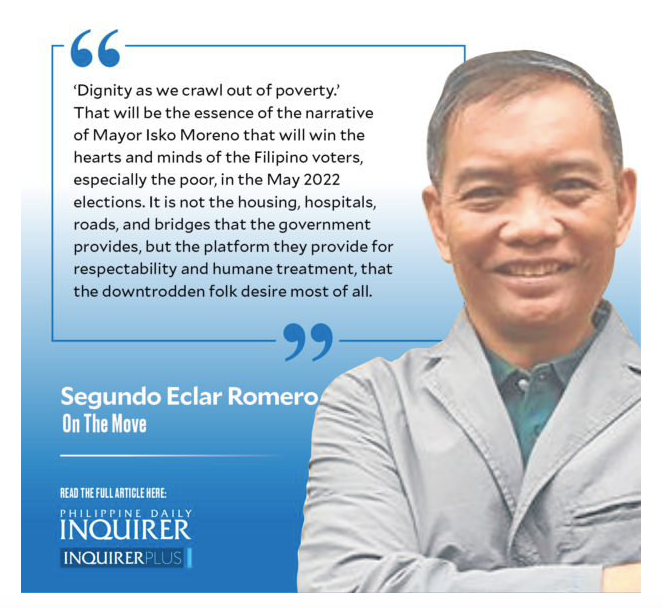 “Dignity as we crawl out of poverty.” That will be the essence of the narrative of Mayor Isko Moreno that will win the hearts and minds of the Filipino voters, especially the poor, in the May 2022 elections. It is not the housing, hospitals, roads, and bridges that the government provides, but the platform they provide for respectability and humane treatment, that the downtrodden folk desire most of all. It is as if, as Yorme moves around the esquinitas and talipapas of the city, there is a video of his humble beginnings playing in his mind.

This ‘’wag dugyot’ narrative is the authentic message that will resonate with the people in the coming elections, and anything else is “boring”—irrelevant, repetitive, unredeeming. In yesterday’s announcement of his candidacy, Yorme took a dig at the administration, saying, “Kahit na ako ay naging busabos, hindi ako naging bastos. Naging marumi man ang katawan ko, hindi kinailangang sabunin ang bibig ko.” Yorme is using innuendo to contrast himself with the incumbent while skillfully postponing the inevitable frontal and intense war of attrition.

The winning narrative of the Isko Moreno run for the presidency is encapsulated in the housing project he built in Baseco, Tondo, aptly named the Basecommunity. There are 229 units, each one 42 square meters, on site. For our Ateneo transformative urban resettlement team, this means a lot. Having studied over 40 resettlement areas for ISFs (informal settler families) all over the country, we know how difficult it is to provide on-site housing. Our research team visited Baseco in 2018 to interview the intended beneficiaries of the government’s on-site housing program. One in three did not have a job. Average family income was only P6,000. Out of 30 residents, only three had some college education. Most came from other parts of Manila, but some came from as far away as Lanao del Norte, Cebu, Samar, and Leyte.

We learned that building houses in the Baseco area was a challenge, not only because of the lack of space but also because the ground was too soft to admit more than two-floor buildings. The 229-complex that Mayor Isko built and turned over to poor beneficiaries in record time is, in our vast experience on ISF resettlement, remarkable.

Mayor Isko is fond of talking about prototypes. Indeed, he banks on the demonstration effect of his three-year term as mayor of Manila. Apart from the Basecommunity, there is also the 344-bed Manila COVID-19 Field Hospital at the Quirino Grandstand. Manila has also distributed 100,398 tablets to students of public schools in the city and 11,000 laptops with pocket Wi-Fi to public school teachers. Most visible, of course, has been Mayor Isko’s COVID-19 response: 2,134,696 COVID-19 vaccines, 891,992 of them as second doses, administered by the first week of this month.

Will these be sufficient? They should be. He is still building prototypes, like Tondominium 1 and Tondominium 2 to be completed within the year, and Binondominium by January 2022. There will be more 300-unit buildings—San Sebastian Residences, San Lazaro Residences, and Pedro Gil Residences. A seventh Manila hospital is also planned. Vice Mayor Honey Lacuna is already primed to continue these projects.

Isko Moreno’s announcement yesterday marked a brilliant streak. He joined the Aksyon Demokratiko on Aug. 4 and was elected head of Aksyon on Aug. 12. Samira Gutoc, a much-respected civic leader and advocate for women and “bakwits,” also joined Aksyon’s national executive board. Rep. Edgar Erice, a stalwart of the Liberal Party, joined Aksyon on Sept. 20. Moreno chose Dr. Willie Ong, a highly respected, social media-savvy health advocate, as his vice presidential running mate on Wednesday. Shortly after, Sen. Ralph Recto and Rep. Vilma Santos-Recto endorsed the candidacy of Yorme, adding that Rep. Recto might run as a senator in Yorme’s slate.

Isko Moreno is deliberate, resolute, and focused. In time, people will understand why Willie Ong was chosen to be his right-hand man. To Yorme, this is a matter not only of providing medical solutions, but more importantly, communicating as widely and effectively as possible to the people what, and how, collective action needs to be taken over the long haul.

Read Next
For whom do you fight, Manny?