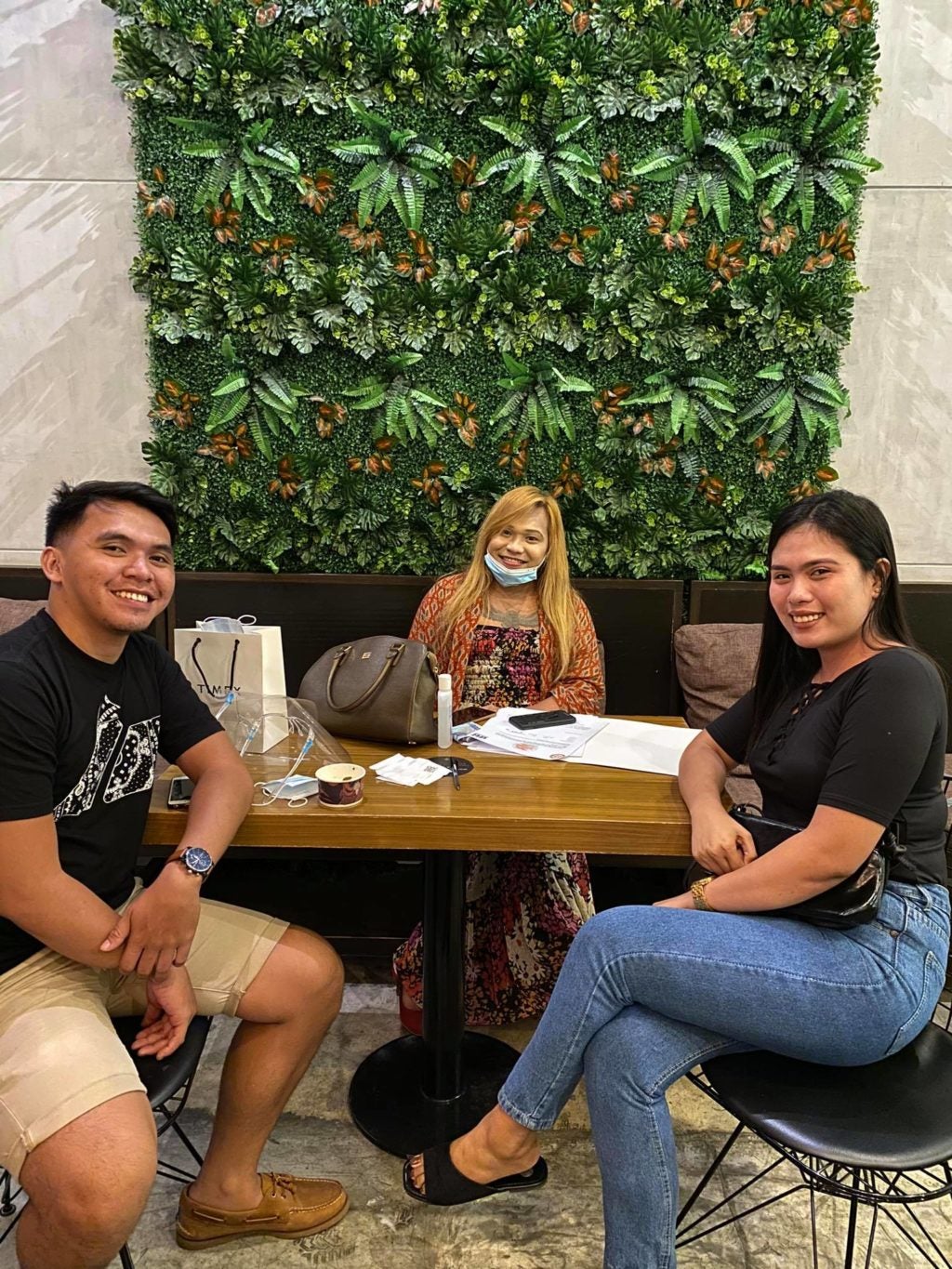 Leira Mae Pino and Jeznel Lorenz Tano pose for a photo with their wedding coordinator Villasan Saramosing (center) during a January 2021 meeting in a mall in Cebu City. | photo courtesy of Leia Mae Pino

MANDAUE CITY, Cebu – A couple from Cebu City has sought the help of local authorities in locating their wedding coordinator whom they accused of ‘scamming’ them.

Leira Mae Pino, alleged that their wedding coordinator, whom she identified as a  certain Jayson “Jhaycie” Villasan Saramosing can no longer be reached by phone and through his social media accounts since Tuesday, September 28.

Pino, 24, said she and her partner, Jeznel Lorenz Tano, 25, had already paid at least P200, 000 to Saramosing for their reception, church preparations and the purchase of supplies and services that are needed for their wedding scheduled at the Cebu Metropolitan Cathedral on October 23.

Saramosing, she said, last contacted her through his social media account at about 4 p.m. on Monday, Sept. 27, to remind her of a food tasting for her wedding reception that was scheduled at 12:30 p.m. on Tuesday and a church visit that was scheduled later that day.

But when she tried to contact Saramosing, a resident of San Fernando town in southern Cebu, on Tuesday morning, the wedding coordinator could no longer be reached.

(He no longer gave an update yesterday (Tuesday).  I have been trying to call but his number is out of reach and his Facebook account has been deactivated and people have been sending me messages and I no longer know what to do.)

CDN Digital is yet to get Saramosing’s statement as of this writing.

This was already the second incident in less than a month wherein a Cebu-based couple has accused their wedding coordinator of scamming them.

Earlier, a video showing bride Cherry Pie Purisima, who broke down in tears after learning that there was no reception for her wedding, also went viral.

Pino said she last saw Saramosing during their prenuptial shoot that was held in a resort in Boljoon town, southern Cebu on Sept. 23.

During their talk, Saramosing had informed her that he was about to release payments to the videographer and photographers that they hired and for the wedding supplies that they bought using the cash that they already gave.

Thinking that their wedding coordinator was a professional and was trustworthy, the couple had been releasing cash to Saramosing.

The first payment of P35, 000 was made when they first met with their wedding coordinator in a mall in Cebu City to discuss their wedding plans.

Since their first meeting, Pino said that she has been in touch with Saramosing by phone and through his social media account.

When she uploaded videos and photos from their prenuptial shoot on Friday, Sept. 24, and Monday, Sept. 27, respectively, Pino said she received several messages on social media telling her that they were also scammed by Saramosing.

Pino said she tried to contact Saramosing on Tuesday to look for answers but he can no longer be reached. Even his social media account was already deactivated.

Already worried, Pino said she started to call their wedding suppliers.  She also checked on their church and reception bookings.

When she made her inquiries, Pinoalso found out that Saramosing did not book the Cebu Metropolitan Cathedral for their October 23 church wedding.

Even the photographer and videographer who did their prenuptial shoot and the resort in Boljoon town where they had their  shoot have not been paid.

When the couple visited a restaurant that is located in a mountain barangay in Cebu City, they were also told that the supposed reception for her wedding have not been booked there.

Wanting to get their money back, Pino said they already report the incident to the Pardo Police Station after which they were advised to coordinate with the cybercrime unit of the Philippine National Police.