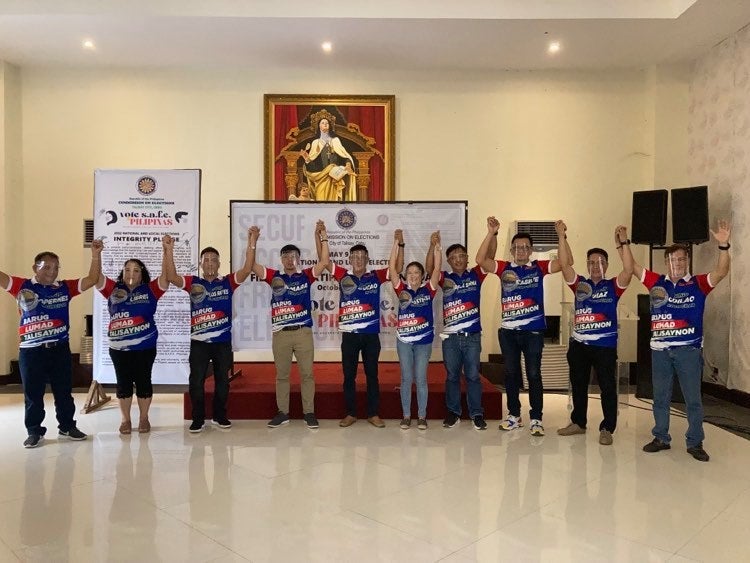 The slate of the Barug Lumad Talisaynon headed by incumbent Talisay City Vice Mayor Alan Bucao, who is vying for the mayoral post, and Rico Almaria, who is running for Vice Mayor in the 2022 elections, filed their certificates of candidacy at the Talisay City Comelec on Friday morning, October 8, 2021. | via Mae Fhel Gom-os

CEBU CITY, Philippines — Incumbent Talisay City Vice Mayor Alan Bucao said that he decided to run for the city’s top position against the wife of his ‘former’ ally Gerard Anthony “Samsam” Gullas due to an unfulfilled promise made by the latter’s grandfather and incumbent First District Representative Eduardo Gullas.

Bucao revealed this after he and his running mate, former Tabunok barangay councilor aspirant Rico Bucao Almaria, along with the entire slate of the Barug Lumad Talisaynon, filed their certificates of candidacy (COC) on Friday morning, October 8, 2021.

The incumbent vice mayor, who was a former member of the Alayon Party, which was founded by Eduardo Gullas, said that since 2016, the latter had promised him to be the party’s standard-bearer for the next midterm elections.

Then sometime in 2018, Samsam, who was then the First District Representative, also allegedly mentioned that since Bucao had long been serving the city, he would be the party’s mayoral bet for 2019, saying there’s no one from the Gullas clan who would run for the post.

However, in the 2019 elections, according to Bucao, he was told by Eduardo that he and Samsam would swap positions for only one term.

Bucao also alleged that Eduardo said that after the said term, it would be up for him and Samsam to decide whether they would swap positions since he would be retiring from politics.

Bucao, however, clarified that he has nothing against incumbent Mayor Samsam, stressing that he and his wife, incumbent city councilor Marietta Bucao, told the latter that it would be okay should he decide to run as mayor and Bucao as vice mayor in 2022.

Bucao said the problems in Talisay City cannot be solved by other people.

Bucao , who served the city for 32 years already, said that he has prepared a lot of programs should he be elected as Mayor, which would solve the city’s problems on infrastructure, public market, transportation, environment, health, and social sources.

He, however, stressed that he would not divulge these programs, citing that it is common nowadays to copy-paste the programs of other aspirants.

Bucao also said that his wife, Marietta, decided not to seek reelection for the 2022 elections, adding that the latter was just forced to run in the last election due to their loyalty to Eduardo Gullas.

He said they do not want a political dynasty that will be serving the city.

Meanwhile, Almaria, who is allegedly a distant relative of Bucao, said that he decided to run for a higher position despite failing to win as an independent barangay councilor in 2018, due to the cause that the party has for the Talisaynons.

Almaria said that he believes Bucao has all the qualities to lead the city to new heights.

Read Next
Pastor wants to ‘end political dynasties in Cebu’, runs as governor