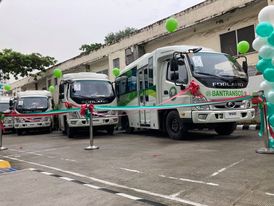 Ten modernized jeepneys were launched on Saturday, October 9, 2021, at the Land Transportation Franchising and Regulatory Board in Central Visayas (LTFRB-7) compound. | Photo by Mae Fhel Gom-os

This is after the Banawa Transport Cooperative launched its first 10 units on Saturday morning, October 9, 2021, at the compound of the Land Transportation Franchising and Regulatory Board in Central Visayas (LTFRB-7).

The said units will be plying routes covering Labangon-Colon, Labangon-SM, and Banawa to Carbon.

LTFRB-7 Director Eduardo Montealto Jr. said that the units have complete features which are similar to the MPUJs that were previously launched.

Montealto said that while the 10 units have an automatic fare collection system and monitor, they also have chargers for mobile phones.

This means that those who ride these jeepneys can freely charge their low-battery gadgets.

And while each unit is air-conditioned, the regional director stressed that its windows can be opened as well.

With the launching of the 10 units, Montealto disclosed that the region now has 756 operating MPUJs all of which are plying in Metro Cebu.

He, however, clarified that there are other MPUJs in the region, including the 10 units in Bohol Province, but these are not operational as of this time due to some reasons.

Montealto said they are expecting more modernized jeepneys to be launched in the region in the coming months.

It can be recalled that Montealto said that all traditional public utility jeepneys (TPUJs) currently plying in Central Visayas, will soon be replaced with modernized jeepneys.

TPUJs currently plying in the region were only given special permits to operate while awaiting their modernized units.

The regional director also clarified that the transition should not be considered as a phaseout of TPUJs, saying that they were just the same operators who applied for modernization.

LTFRB-7: All traditional jeepneys will soon be replaced with modernized jeepneys