Fishermen hold protest in Tayud: No to reclamation project 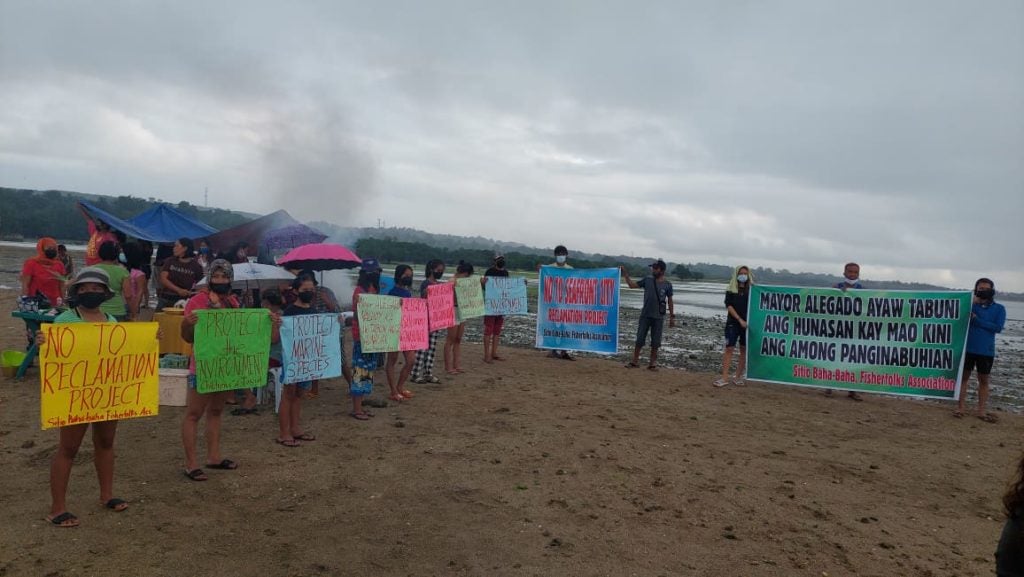 Some 100 fisherfolk hold a protest rally along the shoreline of Barangay Tayud in Consolacion town opposing the planned reclamation project in the area. | Futch Anthony Inso

LAPU-LAPU CITY, Philippines — Close to 100 fisherfolks and residents in Barangay Tayud, Consolacion town in northern Cebu protested on Sunday morning, November 7, 2021, against the reclamation project that will be implemented by the municipal government in their area.

Protesting fisherfolks were seen at the shoreline of Barangay Tayud holding their tarpaulins printed with their messages opposing the reclamation project, and calling on President Rodrigo Duterte to hear their concern.

They also showed their catch that morning from their “gango,” a type of fish pen that they have built, while some residents looked for seashells on seashore using their bolo and hands.

Maximiano Sinoy, 62 years old, said that had been fishing since he was 15.

He also refuted the claims of the town officials that marine resources in the area were already scarce by showing the fishes that he harvested from his fish pen.

(They should not cover this area. Take pity on those who depend on the sea.)

Fisherfolks in the area have also reiterated that they were not consulted in the project.

Sinoy said that he did not know of any plans of the town, especially in implementing an alternative livelihood for them.

One of the fishermen shows his catch of fish for the day from his ‘gango’ that he harvested in the area. | Futch Anthony Inso

Ramil Cagang, a leader of the fisherfolks in Sitio Baha-Baha, also expressed his opposition to the project.

(We are not in favor [of the reclamation project] ifit will be implemented. We the fisherfolks are the ones affected. It is not only us local fishermen but there are also fishermen from other areas that fish in Sitio Baha-Baha, an area where they usually rely on to fish.)

(If we can, we will stop the project but we will not approve of it.)

He said that this had already been the livelihood of their grandparents, and even to the younger generations in the area.

During the protest, fisherfolks also cooked their catch at the shoreline and eat them for their breakfast.

Some of the fisherfolk scour the shoreline for shells that they later cooked for breakfast during the protest rally. | Futch Anthony Inso

Earlier, Mayor Joannes “Joyjoy” Alegado said during his State of the Town Address (SOTA) on October 25, that the town would continue no matter what with the controversial 234.80-hectare Seafront City reclamation project in Barangay Tayud.

This despite opposition from different groups because the project would be a very big help not just for Consolacion but also to the entire Cebu Island.

Read Next
Kang KOs Pinoy boxer, Apolinar, in 8th round in Korea