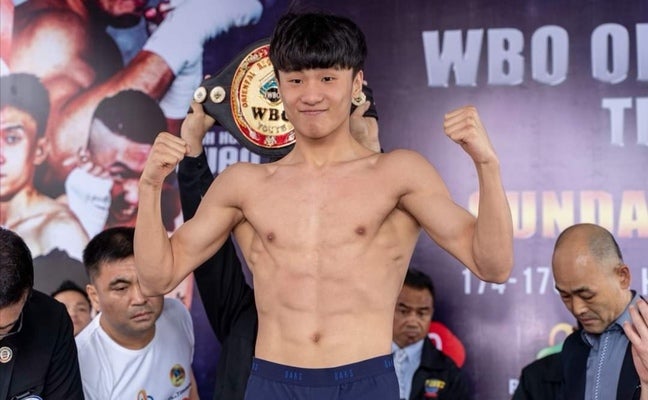 On Saturday, his latest victim in the ring was Pete “Thunder” Apolinar who he knocked out in the eighth round to retain the World Boxing Organization (WBO) Oriental featherweight title in South Korea.

It was a lopsided match after Kang decked Apolinar three times in their bout. With the victory, the 20-year-old Kang remained unbeaten at 14 wins with 7 knockouts with 2 draws.

Meanwhile, the 26-year-old Apolinar suffered his second defeat with 15 wins and 9 knockouts.

According to Apolinar’s trainer, Julius Erving Junco, they didn’t expect that the fight was held in an outdoor venue in a cold weather.

For them, it affected Apolinar’s condition prior and during the fight.

Meanwhile, Kang utilized his height and reach advantage to connect solid combinations to the head and body.

Apolinar had his fair share of good moments when he landed solid blows that rocked the Korean boxer.

However, in the fourth round, Apolinar was downed with a counter right straight.

In the fifth round, Apolinar got hit with a one-two combo. He lost his footing and touched the canvas which scored Kang’s second knockdown.

Despite getting beaten, Apolinar managed to land stinging jabs that left Kang’s nose profusely bleeding in the ensuing rounds.

However, in the eighth round, Apolinar was knocked down for the third time after getting tagged with a counter right hook while being pinned on the ropes.

In 2019, Kang defeated Apolinar’s stablemate Tomjune Mangubat via split decision in Ho Chi Minh City in Vietnam for the same title at stake.