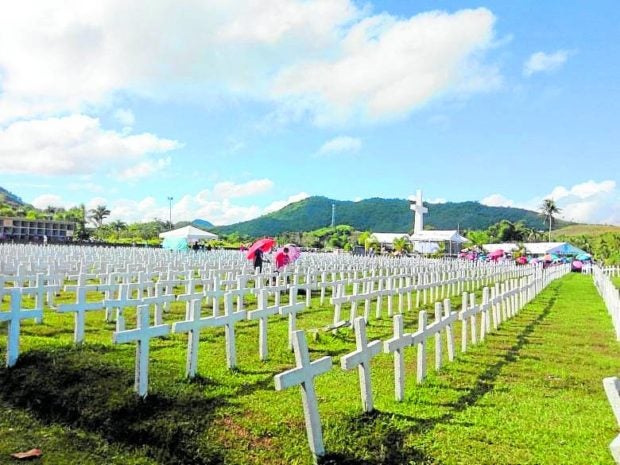 MASS GRAVE: The families of some of more than 2,000 who died during the onslaught of Supertyphoon “Yolanda” (international name: Haiyan) on Nov. 8, 2013, visit the mass grave in Tacloban City for typhoon victims on Monday, the eighth anniversary of the tragedy. —JOEY GABIETA

TACLOBAN CITY, Leyte, Philippines — Eight years have passed since Supertyphoon Yolanda (international name: Haiyan) pummeled this city and the rest of Eastern Visayas and many other parts of Cebu and Panay Islands.

But Oscar Mabini has still to get over the loss of his 27-year-old daughter Cristina and two granddaughters in a storm surge that hit their community in Barangay 69, Anibong District, in the morning of Nov. 8, 2013.

“The pain of losing my eldest daughter, together with her two young kids, age 2 and 4, is still fresh. I will never get tired of coming here to visit them for as long as I live,” said the 68-year-old retired seaman who visited the mass grave for the typhoon victims in Barangay Basper here on Monday.

At least 2,200 people, who died at the height of Yolanda, were buried in the mass grave put up by the city government of Tacloban inside the compound of Holy Cross cemetery in Basper.

Mabini said he was not even sure if the white cross that marked the grave where he lit some candles was that of his daughter and grandchildren.

“What I did was I counted 11 steps from the entrance [of the mass grave] and eight steps to the right. That was where I offered the candles and prayed for their eternal repose,” he said.

Eleven, he said, represented the month of November while eight was the day when the supertyphoon wreaked havoc in Tacloban.

The city government established the 1.2-hectare mass grave as a memorial park with thousands of white crosses a year after Yolanda hit the city. The mass grave was where most of the dead, mostly unnamed and decomposing, were hurriedly buried days after the typhoon. Since then, relatives of those who died during the supertyphoon have been visiting the mass grave every All Saints’ and Souls’ Days on Nov. 1 and Nov. 2, except for this year when visits to cemeteries were prohibited to avoid the spread of COVID-19.

Mayor Alfred Romualdez, who led the eighth anniversary of Yolanda on Monday at the mass grave, said the city already “moved on” from the massive tragedy but would not forget those who died.

He credited Taclobanons for their resilience and was thankful to the outpouring of help from local and international communities. 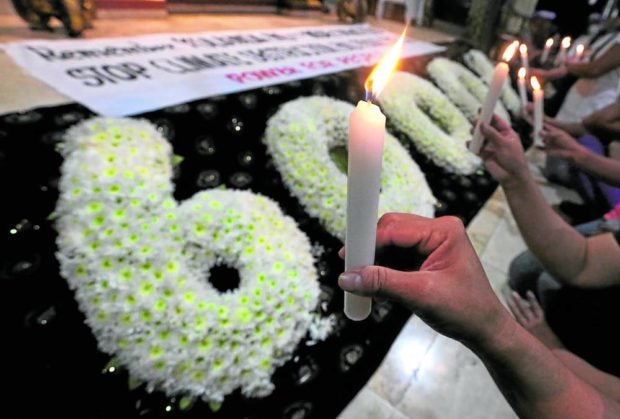 FOR VICTIMS OF NATURE’S WRATH Relatives of victims of Supertyphoon “Yolanda” light candles and offer wreaths during a Mass at Malate church in Manila on Monday to mark the eighth year of the disaster that killed more than 6,000 people, mostly in the Eastern Visayas region. —MARIANNE BERMUDEZ

“I am happy to see that after eight years, we’ve moved on. From what I’ve seen, it clearly shows that a community that stands together, lives together,” said Romualdez, who was also the city’s mayor when Yolanda struck.

Fr. Willy Vallar, who officiated the anniversary Mass, also gave credit to the various humanitarian groups that came to the city and even the journalists who reported about the tragedy in Tacloban and the rest of the region.

“Thank you for the love, care, and concern [which are] why we were able to recover,” he said in his homily.

Vallar said “faith and hope” among Taclobanons played a vital role in their recovery.

Other areas in Eastern Visayas also commemorated the eighth anniversary of Yolanda although they made it simple and low-key due to restrictions caused by the COVID-19 pandemic.

Classes and work were suspended in many parts of Eastern Visayas, which is composed of the provinces of Leyte, Southern Leyte, Northern Samar, Eastern Samar, Samar, and Biliran to remember their loved ones who perished in the supertyphoon.

Before sunset, church bells in Eastern Visayas simultaneously pealed to commemorate those who died during the supertyphoon.