The plague of placeholder candidacies 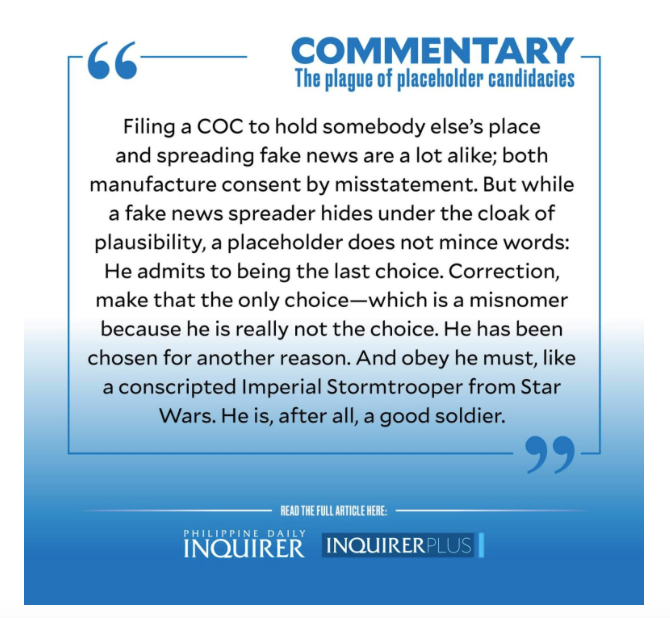 Do I look like a mockery to you?” asked Sen. Bato dela Rosa, just before the ink on his certificate of candidacy (COC) ran dry.

No one asked him that question. Perhaps no one even thought of it. Yet, for all the burdens of the presidency, that probably is the only question he thought hard about. He did not need a teleprompter to address the elephant in the room. And that’s because he already knew the answer, which came in the form of another question: “What do you think of the 19 million people who voted me into office?” Since a considerable number catapulted him to the Senate, his latest candidacy must also be seen as genuine and true. But truth, alas, is likely the last thing he had in mind when he signed himself up for Malacañang.

Filing a COC to hold somebody else’s place and spreading fake news are a lot alike; both manufacture consent by misstatement. But while a fake news spreader hides under the cloak of plausibility, a placeholder does not mince words: He admits to being the last choice. Correction, make that the only choice—which is a misnomer because he is really not the choice. He has been chosen for another reason. And obey he must, like a conscripted Imperial Stormtrooper from Star Wars. He is, after all, a good soldier.

Once upon a time, people needed to distinguish between numbers, say 222 and 2022. Without zero, the numbers are the same. So zero as a digit is a special placeholder. It changes the value of the number. But in a free and fair election, placeholders should not count, since they have absolutely no value. They have no genuine intention to put themselves in the race and are there merely as a proxy for somebody else who will take their place at the opportune time. In this scenario, both the substitute and the substituted become complicit. They falsify the intent of the certificate of candidacy, play around with people’s choices, and devalue a right our forbears had fought so hard to restore.

Fake news relies on the captivation of the masses, generating clout for populist candidates. Backed up by surveys and troll farms, the rabble-rousers ride on what Alexis de Tocqueville termed the “tyranny of the majority” to prop their candidates up as, say, anticrime crusaders. Rodrigo Duterte exploited his mass appeal to gain this kind of support. His late substitution pandered to the crowd’s sense of wonder and excitement when he replaced Martin Diño as PDP-Laban’s frontrunner in 2016.

A candidate of a political party who dies or is disqualified may be replaced by another candidate from the same party. But despite the law’s sensible rationale, it has not prevented nuisance candidates, major and minor ones, from running.

In the meantime, House Bill Nos. 10380 and 10387 and Senate Bill No. 2349 have been filed to ban voluntary substitution—something lawmakers should have done early on. In 2016, the Comelec had warned against the “bastardization of the entire process” while dismissing the petitions against then Mayor Duterte. Even then, the poll body conceded that the remedy was in the hands of Congress.

But with the vague rule firmly in place, politicians will only play squid games around it. In “Political Order in Changing Societies,” Samuel Huntington wrote about the crucial role of order and stability in developing countries. When institutions fail to change when they become dysfunctional, “political decay” sets in. Francis Fukuyama added, in “Political Order and Political Decay,” that institutions do not adapt because of self-interest, cognitive inertia, and entrenched political actors.

Thus, without stringent measures against substitution, voters would have to reconfigure their preferences at every turn. This is chaotic. It’s time we undo a decadent practice that serves nothing but the shifting sands of allegiance, under which the certificate of candidacy becomes a cancellable, transferable ticket ride to a government post.

Lorenzo Thomas M. Lazaro recently graduated from Ateneo de Manila University with a bachelor’s degree in political science, minor in history. He took courses on The History of the Cold War and Asian American History and Culture at Harvard Summer School.