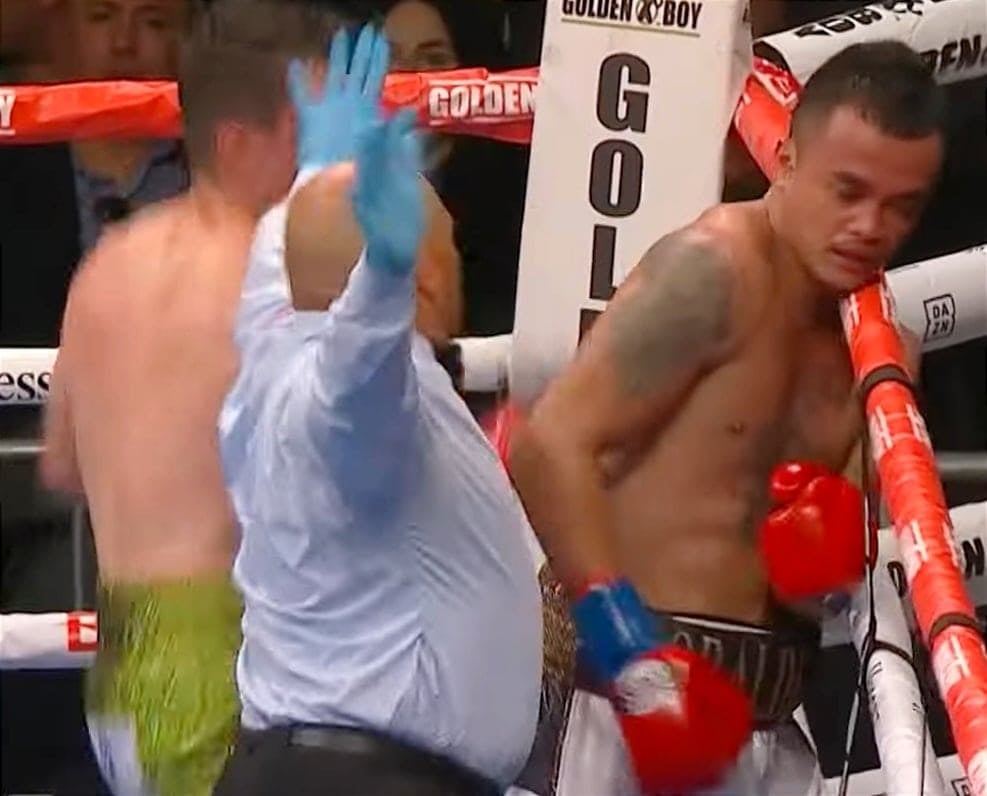 John Vincent Moralde turns away from William Zepeda in the fourth round prompting the referee to stop the WBA title fight in the US. | Screen grab from the bout’s highlights.

This as Zepeda overwhelmed Moralde with punches coming in from all directions forcing the latter to turn away and give the fight up midway in the fourth round.

It earned Zepeda a knockout victory which added to his unbeaten record now with 24 wins with 22 knockouts.

His bout against Moralde was nothing but pure dominance from the opening bell all the way to the fourth round.

Zepeda started to throw a barrage of combinations against Moralde who was forced to defend himself while being pinned against the ropes.

Moralde, from General Santos City was able to counter Zepeda numerous times to the head, but the latter’s volume of punches continue to pile on the score cards.

Moralde and Zepeda continued to trade punches with the latter connecting the cleaner ones to the head and body.

The volume of punches from Zepeda took its toll for Moralde who started to slow down on the third and fourth round.

The Mexican’s domination forced him to defend himself most of the time while absorbing the majority of the punches thrown.

Sensing a knockout victory, Zepeda threw more combinations and pinned Moralde against the ropes in the middle of the fourth round.

Meanwhile, Moralde, who also sensed that he’s about to get knocked out decided that he had enough of the punishment and instead, he turned away, prompting the referee to stop the bout at 1:59 mark of the fourth round.

Photo: John Vincent Moralde turning away from William Zepeda in the fourth round. | Screen grab from the bout’s highlights

Moralde, Zepeda make weight; title fight in US a go