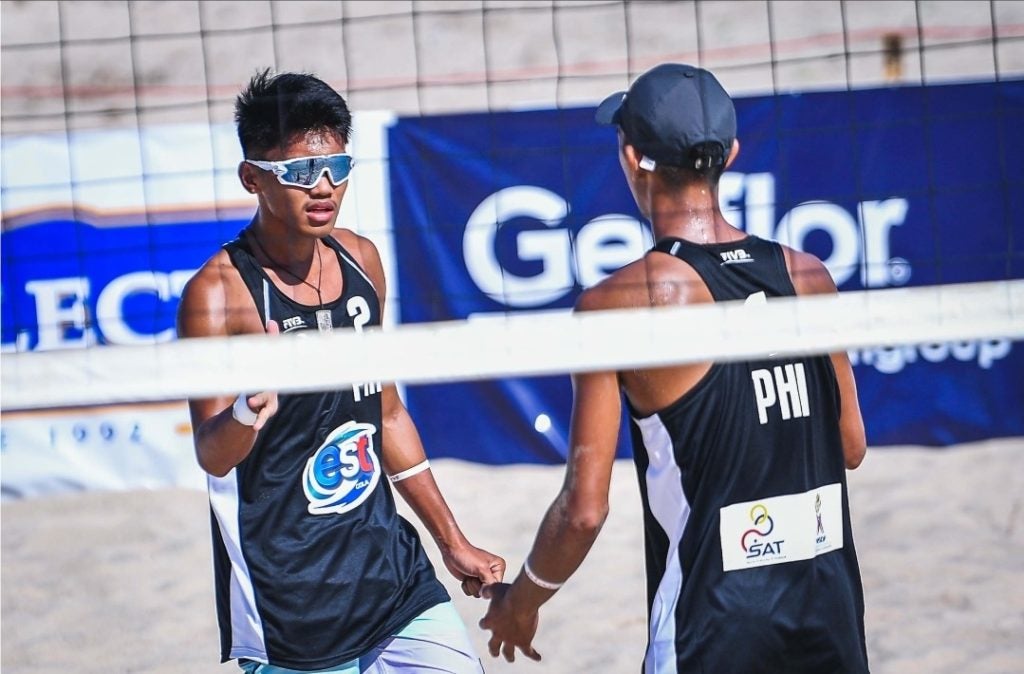 Alexander Iraya (left) tries to give Jayrack Dela Noche (facing back) a high-five during their victory against Estonia in the FIVB Beach Volleyball U19 World Championships in Phuket, Thailand. | Photo from PNVF

CEBU CITY, Philippines— The tandem of Jayrack Dela Noche and Alexander Iraya etched a historic feat for the Philippine volleyball scene when they logged the country’s very first world championship-level victory in the ongoing FIVB Beach Volleyball U19 World Championships by beating Estonia, 16-21, 21-15, 15-12, on Thursday, December 9 in Phuket, Thailand.

Dela Noche and Iraya stunned the heavily favored Estonians of Karmo Saviauk and Kaur Erik Kais by overcoming a first set loss and went on winning the two remaining sets.

It was a huge morale booster for the Filipino tandem after they opened their campaign with two straight losses against Thailand in the opening match and Australia in the second match.

Although they didn’t make it to the Round of 24, it was still a motivating sight to see in the Philippine beach volleyball scene.

Estonia, despite the loss, advances to the Round of 24 along with Australia manned by Jack Pearse and Lucas Josefsen.

The Negrense duo opened their campaign with a loss to Thailand’s Narakorn Chumaphai and Veerayut Sopati,15-21 and 19-21 last Tuesday and went on losing to Pearse and Josefsen in their second match, 20-22, 9-21, last Wednesday.

Iraya and Dela Noche will stay in Phuket until December 19 as they are also scheduled to compete in the FIVB Beach Volleyball U21 World Championships.

Last July, their tandem got the country’s attention when they reached the quarterfinals of the Asian U21 Championships in Nakhon Pathom, Thailand.